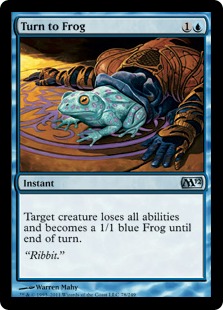 In case you missed the original Finer Points articles where we discussed the Stack and State-Based Actions, you can check them out here and here. This week we’re continuing the tradition of discussing wildly complicated rules minutia with Layers. When you’re trying to figure out whether your [mtg_card=Turn to Frog] is the right play, you’ll need a basic understanding of Layers to make that decision. The layers are in place to provide a basis for applying continuous effects in the correct order, such that you consistently end up with the same characteristics given a set of circumstances. First, let’s look at an example of why we need layers. You control [mtg_card=Castle], giving your untapped creatures +0/+2. You have a [mtg_card=Llanowar Elves] in play and untapped, which is enchanted with [mtg_card=Dead Weight]. Your opponent casts [mtg_card=Twisted Image] on your [mtg_card=Llanowar Elves]. It’s not entirely straightforward to determine what’s going on. Layers help solve this problem by putting each type of effect in a category to be processed in a specified order. Of course, this is a relatively simple example, and infinitely more complex situations are bound to arise when you play enough games.

To get everyone up to speed, here are the layers from the Comprehensive Rules:

That’s simple enough, right? Let’s look at an example to nail down the first few layers, then we’ll get to Layer 7, the tricksiest of layers.

You control an [mtg_card=Inkmoth Nexus] which you have animated, making it a 1/1 Blinkmoth Artifact Creature Land with flying and infect. Then you cast [mtg_card=Phyrexian Metamorph] copying the animated Inkmoth. What do you have? You have an un-animated Inkmoth Nexus. Based on Rule 706, your copy only gets the copiable values of the object it is copying as written on the card (or as written on the spell or ability that created the object,) not the modified values. Now we get to the layers. Your [mtg_card=Phyrexian Metamorph]’s ability is activated, turning it into a 1/1 Blinkmoth Artifact Creature Land with flying and infect. Since this ability applies in Layers 4, 6, and 7, we’ll apply things in that order. The Blinkmoth subtype, as well as the Artifact Creature type comes from layer 4. In layer 6, we apply the infect and flying abilities and in layer 7 we set the power and toughness to 1/1. Next thing you know, your opponent activates their [mtg_card=Alchemist’s Refuge] to Flash in [mtg_card=Grounded] on your Inkmoth. Since [mtg_card=Grounded] and the flying portion of the activated ability both apply in the same layer, they are applied in timestamp order. That is to say, that since [mtg_card=Grounded] applied more recently (it has the most recent timestamp) its effects take over. Now, were you to activate the ability on the copied [mtg_card=Inkmoth Nexus] again, then it would overwrite [mtg_card=Grounded] with the new instance of flying, and your Inkmoth/Metamorph would take to the skies again.

Now let’s say you control [mtg_card=Unstable Shapeshifter] and a [mtg_card=Birds of Paradise] enters the battlefield. Your Shapeshifter becomes a copy of [mtg_card=Birds of Paradise], then you cast [mtg_card=Gravity Sphere], causing all creatures to lose flying. If you cast [mtg_card=Jump] on your bird-copy, it will regain flying for the duration of the effect, since the timestamp is newer than that of [mtg_card=Gravity Sphere]. If, however, you cast a [mtg_card=Dungeon Geists], causing your Shapeshifter to become a copy of it, it will not have flying. This is because the flying ability is being granted from the copy effect in Layer 1, where the ‘loses flying’ effect is being applied in Layer 6.

What about this ‘tricksiest of layers,’ Layer 7? This is where power and toughness changes take effect, and there are sub-layers within Layer 7 to define how they are applied. Once again, from the Comprehensive Rules: 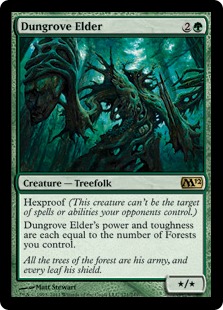 Now take the same [mtg_card=Dungrove Elder], and say you give him a +1/+1 counter with [mtg_card=Travel Preparations] which, as above, applies in Layer 7d. You control [mtg_card=Castle] again, giving him +0/+2 while he’s untapped, making him 7/9 while untapped. You cast [mtg_card=Twisted Image] on it, making it a 9/7. Next, you attack, causing him to lose the +0/+2 from [mtg_card=Castle]. What are his stats? That’s right! He’s a 7/7. Even though he’s losing two toughness from the [mtg_card=Castle], they’re being applied in Layer order, rather than Timestamp order, so instead of a 9/5, you end up with a 7/7.

So what about your own experiences with Layers? Have these situations come up? What’s the most complicated layering-order issue you’ve had?