But is it buzzworthy? 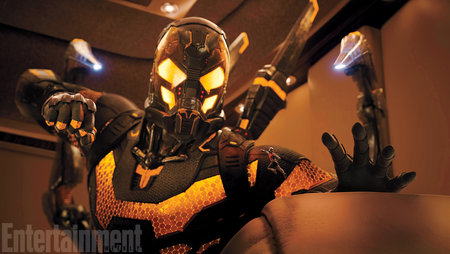 With Marvel’s Ant-Man slated to hit theaters this July, it’s about time we got a more in depth look at the titular character’s opponent, Darren Cross a.k.a. Yellowjacket. A first look at the main antagonist’s suit shows Yellowjacket in all his shiny, giant glory going toe-to-toe with Ant-Man himself.

Director Peyton Reed has some valuable insight about the suit in question. While the “Ant-Man suit doesn’t have a single weapon… Yellowjacket is armed with plasma cannons.” If you’re hung up on the monumental size difference between Ant-Man and his foe, Reed has an answer for that too. “Ant-Man is very fast when he’s small. Also, when he shrinks, he increases his density, so he’s got increased strength.”

Add those abilities to the army of ants Scott Lange controls thanks to his own suit’s abilities and we’ve certainly got the makings for some interesting battles, although I’m still a little leery of a fight that pits plasma cannons against speed, strength and an army of ants.

What do you think of Yellowjacket’s new digs?