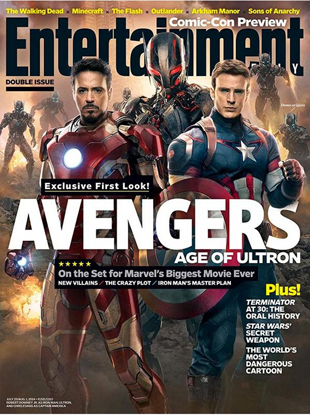 With one week to go before everything on the Internet grinds to a halt to accommodate the marketing juggernaut otherwise known as San Diego Comic-Con, Entertainment Weekly has primed the pump with an exclusive preview of Avengers: Age of Ultron. The first of what is certain to be a mountain of such previews – several weeks back a lot of journalists were flown out for a closer look; most of them are still under embargo – it gives us our first official look at that film’s villain, the android called, well, Ultron.

I’ll admit it, I’m probably not the most honest critic when it comes to these films. With the exception of the execrable Iron Man 2, even the most flawed entries in the series have been a delight. And so it is that my saying “HOLY CRAP THIS LOOKS AWESOME” should be taken with a huge grain of salt. But, you know, holy crap this looks awesome. I’m impressed by the way the design of Ultron’s robot body isn’t trying to run away from how he looks in the comics, but – and I admit I don’t particularly love how Ultron currently looks in said comics – still manages to give it a live action polish without making it too serious.

The story will differ sharply from the 10-issue “Age of Ultron” miniseries – the production has essentially taken the main villain and the title and nothing else – but it will involve, as you can see from the cover, Ultron creating an army of Ultron robots to do, well, something evil, obviously. In the MCU, Ultron is an AI created by Tony Stark (rather than by Hank Pym, since, as Devin Faraci notes on Badass Digest, Hank won’t show up until Ant-Man) to assess threats. Fortunately, Ultron soon goes a bit crazy and develops a mommy/daddy complex, just as god (and Marvel Comics) intended.

So here’s something else: as you know, Paul Bettany, who already voices Tony Stark’s AI assistant J.A.R.V.I.S., will also be lending his voice to Vision, The Avengers’ android member who eventually ends up in a relationship with The Scarlet Witch. In the comics, Vision is created by Ultron (his brain based on that of Wonder Man’s), but he’s eventually convinced to rebel against his creator. I am now placing the odds at 1:1 that Vision and J.A.R.V.I.S. will be the same character. My guess – and obviously you’ve all drawn the same conclusion – is that when Ultron rebels against Tony Stark, he’ll end up corrupting the J.A.R.V.I.S. program and placing it into one of his robotic soldiers. No doubt contact with Tony and, probably, meeting Scarlet Witch during the course of the film will end up bringing him back over to fight for The Avengers.

So what do you think about the movie version of Ultron, readers? Sound off in comments. In the meantime, below enjoy a larger version of the EW cover, along with a page from “Age of Ultron” to compare/contrast.

IDW Goes For the Eyes With New Baldur’s Gate Comic