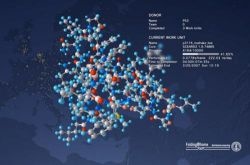 More than a million PlayStation 3 owners have registered for Stanford University’s [email protected] project, giving a significant boost to the project’s computational abilities.

[email protected] is a distributed computing project dedicated to unraveling the mysteries of protein folding, and how errors in the process, known as “misfolding,” relate to numerous diseases including Alzheimer’s, BSE, Huntington’s, Parkinson’s disease and many forms of cancer. First launched in October 2000 for PCs, the PlayStation 3 version of the software was announced in August 2006. According to a GamesIndustry report, approximately 3000 PlayStation 3 owners register for the project every day.

Distributed computing makes use of multiple remotely-located computers to perform complex calculations. These calculations are broken down into separate components and shared among computers, which then communicate their individual results back to a central server. The concept of distributed computing first came to prominence with [email protected], which was made publicly available in May 1999, and numerous other projects have been released since then.

“Since partnering with Stanford University professor Vijay Pande. “Now we have over one million PS3 users registered for [email protected], allowing us to address questions previously considered impossible to tackle computationally, with the goal of finding cures to some of the world’s most life-threatening diseases. We are grateful for the extraordinary worldwide participation by PS3 and PC users around the globe.”

Cock the Vote With Gamecock