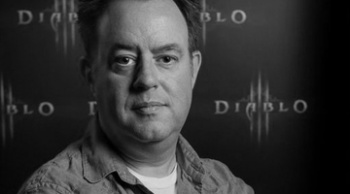 Jay Wilson served as game director of Diablo 3 from launch up until November 2013, when he was replaced by Josh Mosqueira.

Former Diablo 3 game director Jay Wilson has just announced his departure from Blizzard Entertainment, ending a 10-year career at the studio. “Sad to say after 10 of the best years of my life this will be my last week at Blizzard,” tweeted the designer, explaining that he is leaving to pursue his original passion of writing a novel.

Wilson was the game director for Diablo 3 until 2013, when he was replaced by Josh Mosqueira and moved to an “unannounced project” within the company. Now that he is leaving, we may never know what that project was.

He faced harsh criticism for the way he handled the launch of the game, staunchly defending the in-game Auction House feature, and telling nostalgic Diablo II fans that they didn’t actually remember things the right way.

He got into even more hot water with his infamous “Fuck that loser” comment, directed at Diablo II game designer, David Brevik (a move he later apologized for).

He hinted that people could expect to see something from the “sci-fi, fantasy, urban fantasy range” from his literary endeavors. He also plans to move back to the Pacific Northwest.

Mosqueira stepping in for Wilson in 2013 was honestly one of the best things to happen to Diablo 3, in my opinion. During his entire run as game director, Wilson did nothing but tell fans what they wanted, rather than listen. Mosqueira actually listened to the community, and took lots of steps (such as removing the dreaded Auction House) to make the game as great as it is today. I wouldn’t be surprised if the “unannounced project” Wilson was simply code for putting him out of the way somewhere until all the heat surrounding him died down.

Persona 5 US Release Date Is in 2017, Special Edition Detailed