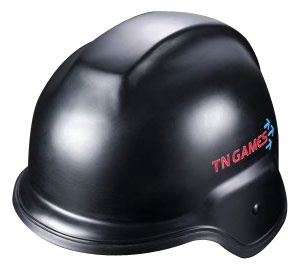 Ever wanted to feel what it’s like to take a bullet through the skull in Call of Duty? This is the peripheral for you.

The HTX Helmet, which looks like a baseball helmet without a lid, “delivers blows to the head when you are fired upon”, according to manufacturer TN Games. The effect even works in three dimensions – get shot in the back, side or front of your head and you’ll feel it in the appropriate place. “Feel bullets whizzing by your helmet or the impact of getting shot in the head,” TN Games advertised. A really good surround sound system might do the trick as well, but the feeling of immersion surely isn’t as profound as when you’re getting ticked in the head by a high-tech piece of plastic.

The HTX Helmet works in conjuction with TN Games’ 3rd Space Gaming Vest, which does essentially the same thing for your body by using “eight active zones that simulate the direction and forces of bullet fire, crushing explosions, and fear-inducing finger taps as they occur in the game”.

Having the helmet and the vest on at the same time might seem overwhelming, but TN Games founder Mark Ombrellaro feels the purpose of his products goes beyond extreme force feedback. “It re-sensitizes you by making the reaction you get not just an artificial thing that means nothing to you. It puts a consequence back into the action,” he told us in May.

The Gaming Vest is compatible with a number of titles including Doom 3 and Call of Duty 2, but there’s no word on what games the helmet will be compatible with or how much it will cost. The HTX Helmet is due for release in 2009.