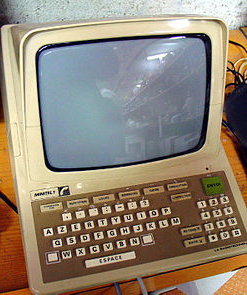 France bids farewell to the Minitel, after thirty years of cybersex and personal banking.

In the 1970s, when dinosaurs roamed the earth, France designed the internet before there was an internet. The Minitel, aka the Little French Box, was built to solve a crippling telecommunications problem, and it did. No good thing lasts forever, and the Minitel – which boasts 800,000 active terminals even today – will be retired on Saturday, with all the fanfare and pomp reserved for the passing of a beloved friend.

The Little French Box was built to connect rural France to the rest of the nation, but it became much more than that. It connected – at its height – over 25 million users to over 23,000 services, including banking, stock trading, travel services, and social networking. Not bad, for a small beige box first brought into the nation’s homes in 1978. Moreover it was free; the state designed it, built it, and delivered it to the citizens of France in much the same spirit that they’d provided high speed rail.

It also introduced a grateful nation to the joys of cybersex. Clever entrepreneurs made a mint providing “pink messaging” services and chatrooms to those willing to pay by the minute for love. Then as now it could be difficult to be sure of the gender of your partner. “I’m not called Julie,” one frustrated operator typed, ending his phone sex career with an epic outburst. “I’m a man, just here to rack up your phone bill,” he said, adding for good measure, “you’ve been screwed, which was just what you wanted all along.”

Minitel’s still a popular device in rural France, where farmers and the elderly rely on their faithful Minitel to connect them to the world. To many it represents a time when France built its own technology, rather than relying on imported electronic devices and systems. It had style, clever design, and was a risk-taker. It was uniquely French, in fact – and as of Saturday, it will be no more.