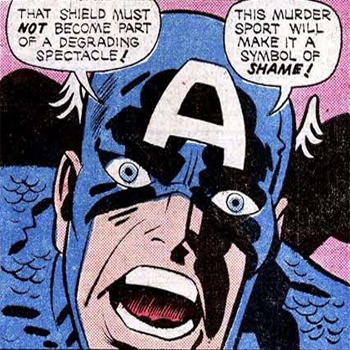 Once upon a time, Frank Miller was one of the biggest names in American comics; famed for his character-redefining run on Daredevil, reviving public interest in Batman with The Dark Knight Returns and upending the medium with his groundbreaking series Sin City. Over the last decade, though, his name has come up most often as a punchline – either about his difficulty writing women, his increasingly unhinged political rants, directing one of the worst films of the 21st Century or just not being good at making comics anymore.

But now the erstwhile auteur thinks he’s found the perfect way to come back: He wants to take over Captain America duties at Marvel.

Speaking on a Reddit AMA to promote Sin City: A Dame To Kill For, Miller told a questioner that he’d like to take on Cap because he “features virtues that my country has either lost or misplaced for a very long time,” and that “I remember telling people at Marvel, just a few days after 9/11, that I hoped they realized what they had there, because Captain America’s reaction to 9/11 would have been pretty direct.”

Reached for comment, Marvel executive editor Tom Brevoort didn’t exactly close the door but specified that it would depend on what Miller actually wanted to do with the character, stating: “I don’t think, for example, we’d have gone ahead with Holy Terror as a Captain America story.” Holy Terror was a superhero 9/11 revenge fantasy originally pitched as a Batman story but was reworked to feature new characters after DC said “no thanks.” The resulting comic was widely panned by critics, with Wired.com calling it “a screed against Islam, completely uninterested in any nuance of empathy.”

Wii U Won’t Get Twitch Streaming Because It’s “Not Fun,” Says Nintendo