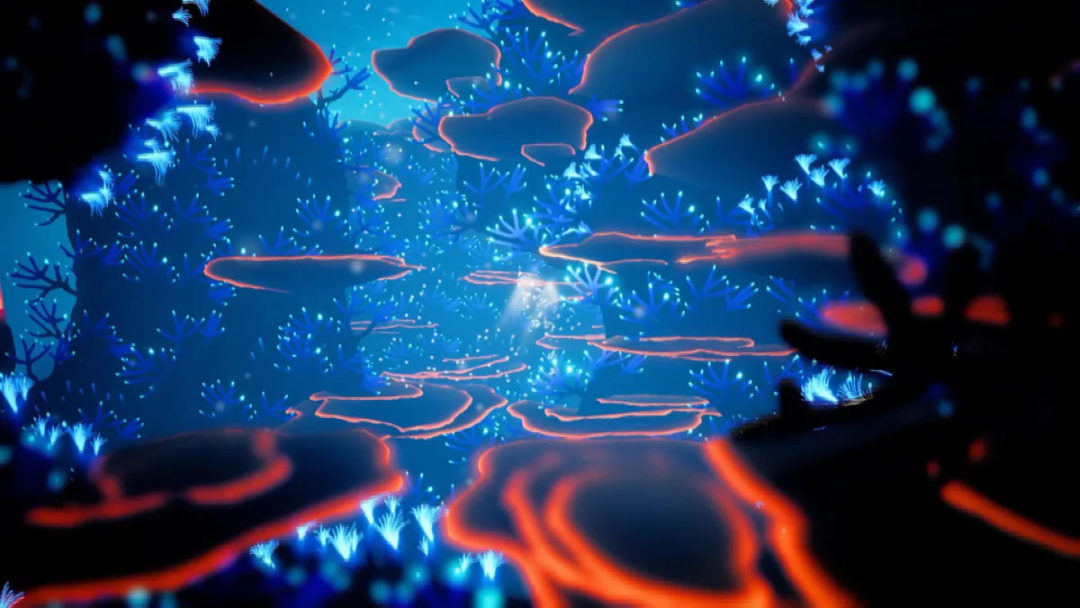 No two video games are developed the exact same way. This is especially true of the underwater puzzle adventure game, Koral. Game lead, Carlos Coronado, discusses how his team developed Koral while sailing the seas.

A love letter to the sea

The most depressing time for a game developer is some weeks after the release of a game. It doesn’t matter if it was a success or a failure. Eventually all the hype and adrenaline will pass, and soon, you realize the project you’ve been working for the last months or years suddenly is no more. Then the terrific question comes: “What do I do now?”

This is what happened to me after the release of my last game, Infernium (Switch, PS4, PC), a survival horror version of Pac-Man that is all about making the player feel anxiety and disgust. It turns out that most times it is easier to know what you don’t want rather than what you do. I knew I didn’t want to make “Infernium 2” or something similar. I wanted to run away from that and explore new gameplay and ideas. That’s when two of my biggest passions came knocking on my door: diving and sailing.

I am in love with the ocean. I learned to dive while backpacking in Southeast Asia, and now I backpack through Southeast Asia and the Mediterranean to dive. I realized that was it. My next game would be a love letter to the sea. But that wasn’t enough. Making a game about the sea was not romantic enough.

I don’t know how I did it, but I convinced seven other awesome game developers and friends to go sailing with me (a not really experienced sailor) to help me develop Koral on a boat in a pristine marine reserve in Northern Catalonia. We filmed the process. But here is a little sneak peek at the challenges of getting Koral developed in the sea. 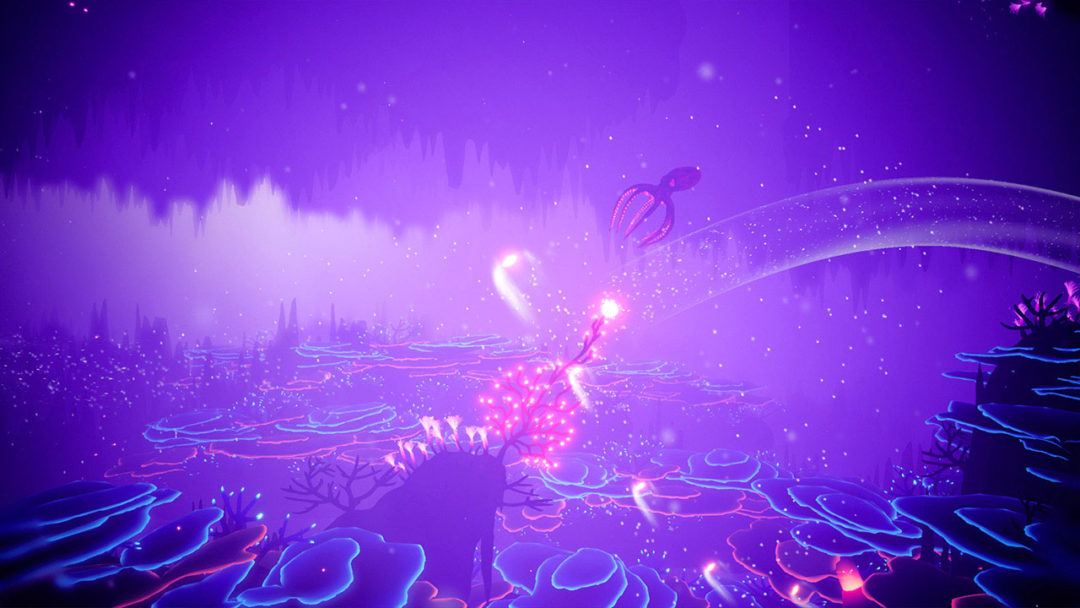 The first question is obvious: How do you get enough power to run the computers? On a sailboat, you have various ways to charge the boat’s batteries (and thus laptops). You can use a clean energy source like wind generators or solar panels, or you can run the engine to charge the batteries too! Unfortunately, Argos (our boat) didn’t have solar or wind solutions and running the engines was our only choice. However, we avoided that by going to land to charge our machines when possible. There is also another twist to it: If you don’t use your laptops, you don’t need to charge laptops!

Knowing that a huge, huge part of the development of Koral was going to be performed on the sea, I started experimenting with an art style that required as little digital production as possible and focused as much as possible on handmade assets. Of course, eventually you have to use the game engine to actually construct the game, but having all the art production made in a notebook helped a lot to avoid using laptops.

What exactly is Koral’s art style? Everything is just silhouettes drawn in a notebook, and then, with a little bit of Unreal Engine 4 magic, some hints of colors are added here and there. Even if you dive and you don’t see any fish, the silhouettes of rocks, cliffs, and other sea environments are going to impact your brain.

Shapes underwater make a super impression thanks to the lower visibility compared to a normal, non-foggy day on the surface. The lack of underwater heavy “fog” in other games is also one of the aspects I don’t like about their art styles. If you are lucky — really lucky — you can see up to 25 meters underwater on a normal open water dive. This means you only see silhouettes unless you get really, really close to something. This is also why diving feels so surreal and otherworldly!

Of course, having the art style sorted doesn’t solve other key aspects of the game. Aside from the art, what parts of the development are less laptop-intensive? It turns out the most important part of any game, the game and level design, doesn’t require a laptop. 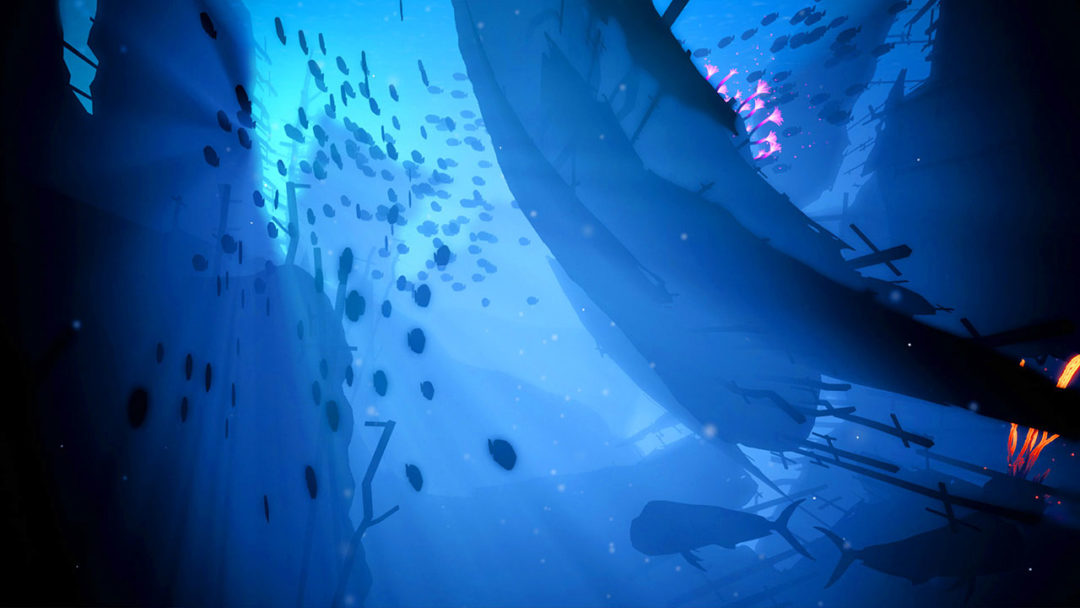 Prior to going aboard Argos, I prototyped game mechanics for Koral inside Unreal Engine 4. Those game mechanics are like the ingredients of a recipe or the individual parts of a puzzle in Portal. They work by themselves, but they are not interesting unless conceived with each other so that you can generate challenges and obstacles for the player to overcome. I made sure those mechanics were really robust and reusable and did a little demo about them to the rest of the crew on the boat. Then it was notebook time again!

Doing the level design of a video game is not just about figuring out clever and complicated puzzles. The hardest part is actually the opposite! Creating the puzzles and environments where the player learns the game mechanics (without text or audio cues in the case of all my games) can be a tedious but really rewarding process. Anyone can design a complex challenge to solve, but designing really good first areas of the game? That’s where the real challenge for the designer actually is!

Luckily for us, this process is also mostly done in a notebook. It is easier to iterate on paper than to design levels directly in Unreal Engine 4 and iterate over and over again. Sooner or later you have to actually test the challenges, and changes are going to be made no matter what, but having a good, robust base in a notebook helps you get an idea of the bigger picture and how much laptop work the game will require.

So was that it? Going on a sailboat to just design levels and make some drawings? Of course not! I wasn’t sure what we would learn in this journey, but I was 100 percent sure being in the sea just by itself would bring new and fresh ideas to the project, and oh boy it did!

It may seem obvious, but being so close to the sea (literally living and sleeping on its surface) overwhelmed us with ideas and concepts we wouldn’t have even thought about if the game were developed on land. Just to give a quick example, prior to this journey we had no idea about ecological buoys and the way they interact with Posidonia grass, one of the fundamental habitats of the sea. Ecological buoys gave shape to an entire level in Koral.

This is the kind of experience you just hope comes to you when you embark on an adventure like the one we had. I could give a million examples about little things that happened that ended up influencing the game, and just that by itself made the journey so, so worth it!

When developing a video game, it is easy to lose track of the message and purpose you want to provide. Koral is designed to be a love letter to the sea, but what exactly does Koral want to say? What is the message the player should receive after completing Koral?

One of the hardest parts of living and developing on a boat is the lack of personal space. The area to live, eat, sleep, and develop is always shared, and the space is so small that sometimes you don’t get those moments of loneliness.

One difficult aspect can also be human relationships with other crew members. I warned the crew at the beginning of the trip that everything gets amplified in a boat. Are you having an argument? It will be a really, really nasty argument on a boat. Are you sad? You will become super depressed. But it also works the other way around. Do you feel happy? You will feel like the happiest human being in the world. A boat is a place for contrasts and bonding.

One thing everyone agreed about after the end of the trip is how surprising it was that not a single problem arose among the crew. We got to know each other in deep, deep ways, and this fact shaped Koral’s ending.

Was it worth developing a game on a boat despite all the inconvenience? Yes. Do we think it made the game better? Hell yeah.

Koral released on May 16 for Nintendo Switch and Steam. The making-of-Koral video is available on YouTube.

From the Developer is a column at Escapist where we hear the trials, tribulations, and triumphs of game development straight from the mouths of the developers themselves.

The Walking Dead’s Lauren Cohan May Return as Maggie