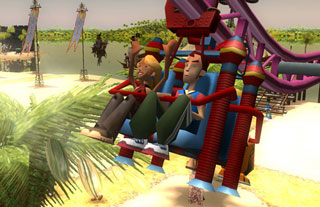 The devs behind Elite: Dangerous and Planet Coaster are suing Atari for royalties owed for Roller Coaster Tycoon 3.

Frontier Developments has put itself into the limelight of late, thanks to the success it has had with Elite: Dangerous and Planet Coaster, but the developer has been around a lot longer than that. It’s been developing theme park games for over a decade, including creating the two Roller Coaster Tycoon 2 expansions and Roller Coaster Tycoon 3 for Atari.

It’s that latter title that’s back in the news today, as Frontier has filed a lawsuit against Atari over the game. According to TMZ, the suit alleges that the publisher owes Frontier roughly $2.2 million in royalties for RCT 3.

After Atari went bankrupt back in 2013, Frontier says it amended its contract and stayed on. Now that Atari is back in better financial condition, Frontier’s been looking at the numbers and it doesn’t think it’s gotten the royalties it deserves for RCT 3. After seeing some sales figures online that didn’t match up with what they were seeing from Atari. According to the TMZ story, Frontier felt it was owed $3.37 million in royalties, but had only received $1.17 million.

The developer asked Atari for an audit of their sales report, which Frontier says the company delayed. This led to the filing of the lawsuit. Frontier chief operating officer David Walsh spoke to Eurogamer about the suit, saying,

“We can confirm Frontier is currently pursuing a complaint against Atari. We have attempted to resolve this issue without legal action since April 2016. We have so far been denied our contractual right to audit by Atari, and we are unfortunately left with no other way to resolve our concerns. We are unable to offer any further comment while the matter is subject to due legal process.”

Obviously, this suit is in the preliminary stages, and there’s likely to be no resolution in the near future. We’ll keep an eye on the story, and keep you updated with any developments.

No Plans For Mass Effect: Andromeda on Nintendo Switch