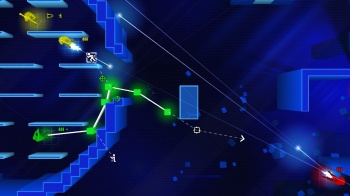 My relationship with Frozen Synapse was practically love at first sight. I was looking for trailers to upload for the site and I stumbled across this video for Frozen Synapse. When I wrote the description, I described it as X-Com meets Rainbow Six in Tron. If you can imagine the planning gameplay of setting waypoints and ordering actions that was presented in early Rainbow Six games combined with the tactical nature of titles like X-Com and all wrapped in a bright Tron-like technological aesthetic then you’ve got a pretty good feel for Frozen Synapse.

Finding an opponent in Frozen Synapse is dead easy. You can change your icon to indicate you are looking for a specified game type, which generally finds you one in less than 30 seconds, or if you’re feeling savvy you can even directly challenge people from your friend’s list or the player rankings. Winning said match however is a different matter. While Frozen Synapse is deceptively simple, expect your brain to be taxed if you want to consistently come out on top. Because terrain and units will be randomized you are always challenged with outthinking your opponent then and there instead of coming up with a great catch all strategy before. In one game, I might hold some machine gunners and snipers behind cover for suppressive fire while I try to sneak some shotgunners through the structures. Another match might be chalked full of exploding each other into pixel bits. You’ll have to dance your rocket and grenade launcher units around to avoid death while trying send your shots to where you predict the enemy will be next turn. When all else fails, you can blow up a few walls to find where they are hiding. Frozen Synapse strikes a great balance between feeling like simultaneous-turn-based chess, just with rocket launchers and machine guns instead of bishops and pawns, and a fast paced game.

I feel what Mode7 Games has done is really refine the tactical strategy elements to deliver a new experience in the genre. Instead of a system of stats or the random number generator determining success, which unit kills which is decided with a weighted series of checks. All things being equal, a stationary unit will kill a moving one, but if they are both moving at the same time, then the unit that had been directed to aim in the correct direction will win the engagement. This rock, paper, scissor engagement system further extends to include being behind cover and changing stances. The rough order of importance for keeping your units alive and killing the enemy first is: cover, changing stances, stillness and then aiming, but the game’s help section will be quick to remind you that all these elements must be considered for success.

Each unit can be independently given waypoints and a series of simple tactical orders to carry out. Units will automatically attack other units in range unless directed not to. It’s a remarkably simple and yet at the same time incredibly deep game. Each turn plays out the next five seconds of your plan. You can preview the outcome and even giving orders to the enemy units trying to predict your opponent’s movements and adjust accordingly. Finally, once you are satisfied, you commit to your orders and the game will generate the turn based on the two sides’ plans. Each turn you are given the opportunity to revise and change your plan. 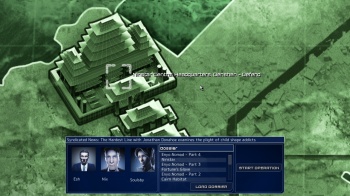 Frozen Synapse is both fast enough to play back and forth with someone, but you can also “play by email” by sending you notifications when the next turn is ready. It’s not unusual for you to be playing in several games at any one time, especially if you enjoy delving into the various multiplayer game modes like Extermination, Secure, Disputed, Charge and Hostage with Light and Dark variations on each. In Light you will be able to see all the enemy units, but likewise he can see yours. I found it pays to be fast and aggressive, though occasionally holding to try and catch your opponent moving while you are stationary. Dark mode is where things can get really fun though. Units are only visible if they are within line of site. Letting you try and sneak a flank attack, feint that you are heading in a certain direction or simply hide a guy around a corner in ambush. You are given grey ghost units to indicate where you last saw an enemy, and correctly guessing or predicting where your opponent’s units are is one of the keys to success. When you join a game, a random map is generated and each team is given a squad of soldiers equipped with machine guns, shotguns, sniper rifles, rocket launchers or grenade launchers. Each weapon behaves differently, so you’ll need to master how best to take advantage of each one. So each match is the opportunity for a new situation, forcing you to focus less on finding the best stat or item combinations and instead on actually making better tactical decisions than your opponent based on the terrain and team you’ve been dealt.

Honestly the developers could have stopped with just the multiplayer and had a shippable product that many would still enjoy thoroughly, but Frozen Synapse is crammed with even more elements that really combine to elevate it into greatness. On the single player side there is a 55 mission campaign in which you play as Tactics, a construct brought in to give orders to the otherwise mindless vatform soldiers. As the game describes it, they can move and shoot with the best of them, but try and give them a book and they are likely to eat it. The narrative centers around the Shape, the network that has grown in connection to become a mirror of our own reality. It’s through this network that you are able to see the world and interact with your units, but there are also various factions vying for control of the Shape and the city. The AI does an admirable job of presenting you a challenge; especially when you are pit against increasingly lop sided odds. With some missions having unique obstacles or objectives to accomplish, mission ratings based on your success and many using randomized maps, the campaign is much more than a simple after thought. Between it and the skirmish generator, there is plenty of fun to be had if you are craving a quick match but don’t want to play or wait for a human opponent.

Back on multiplayer are a slew of community features: from a robust ranking system to friends lists to integration of Twitter, Facebook and Youtube. Some of you may recoil at social networking and media dirtying up their games, but there is something undeniable enjoyable about challenging a friend, destroying them in a match and then spreading it around for everyone else to see, like this rocket filled match I played against BabyTea a few weeks back. Letting you bask in the glow of your own tactically superior prowess or at least until that next match where they see through your flank and destroy half your squad out right.

Bottom Line: Frozen Synapse is an amazing refinement of the tactical strategy genre. It’s both approachable for those new to the genre and deep enough to keep you coming back.

Recommendation: You should go buy this right now and give the included free copy to your friend.

Available for purchase at Frozen Synapse.

Gearbox: Duke Nukem is “Not a Chris Brown Kind of Character”