As Yara Greyjoy, I had already pretty much proven my loyalty to the queen. She had issued a proclamation forcing all of the nobles into confession, meaning everyone discarded a card face down and she got to flip one of them face up. She chose to check what I was throwing away and found a card capable of causing maximum chaos in the kingdom, invaluable to traitors but poisonous to a loyalist like me. There’d been some debate about whether or not this was actually a particularly brazen gambit to become her most trusted advisor, but those suspicions didn’t really stick.

“I’m the only other person on your side and I’ll prove it,” said Jorah Mormont, pointing at one of the missions that the kingdom needed to fulfill in order to avoid falling further into chaos. “I’ll win that one myself.”

I glared at the other nobles gathered around my dining room table. “Don’t any of you play a card there or I will assume you’re a traitor.” They grudgingly agreed and the mission was successful. Confident in our allegiances, my neighbor and I formed an alliance to protect the ruler of the Seven Kingdoms. We hoped we weren’t too late.

The big characters, dramatic plots, and enormous popularity of Game of Thrones have led the book and TV series to be adapted into numerous games include a tabletop RPG, video games, card games, and a miniatures game. But none of them have captured the essence of Game of Thrones quite as well as Dire Wolf Digital’s Game of Thrones: Oathbreaker, which goes light on mechanics and heavy on intrigue. The social deduction game for five-to-eight people is all about achieving your character’s personal ambitions while trying to deceive your friends or figure out who’s lying to your face. 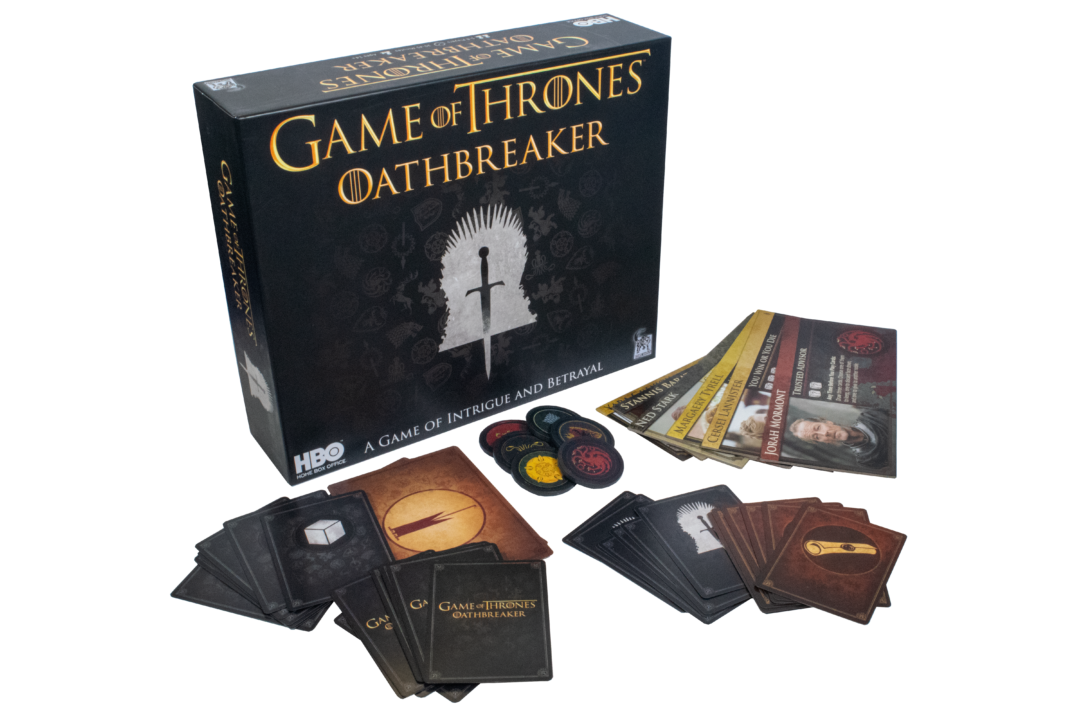 One player is the ruler of Westeros, and the rest are representatives of the Great Houses who have been randomly dealt cards that determine whether they are traitors or loyal to the current occupant of the Iron Throne. Every round, players are confronted by a set of missions based on the series like conquering Dragonstone or freeing Slaver’s Bay. Through a deal with HBO, all of the cards have pictures from the series, which adds to the immersive quality.

Each noble has a hand of cards with three suits (swords, crowns, and ravens) along with sabotage cards that can be used to ensure a mission fails. Each mission has its own suit and is completed successfully if there are more cards of the matching suit on it than sabotage cards. Successfully completing a mission earns the players who spent the most resources on it a reward such as coins, power, or honor and brings order to the realm. Failing a mission results in chaos, which benefits traitors to the throne.

Each noble must play two cards each turn regardless of what their goals are or what they have in hand. That means that loyal players might be forced to play sabotage cards and traitors might unwillingly help the cause, which makes it harder to figure out who’s doing what just by counting the cards people played on each mission. In fact, traitors want at least a few of the missions to succeed thanks to the game’s best innovation to the social deduction genre: ambitions.

In addition to wanting their faction to win, each character has an individual goal that manifests as a need to collect a certain number of rewards in specific categories. This is a mechanic used in semi-cooperative games like Dead of Winter to potentially sow discontent even among players who are on the same side, and it works particularly well in Oathbreaker to keep players guessing in what could otherwise feel like a reskinning of classic social deduction games like Secret Hitler and The Resistance. 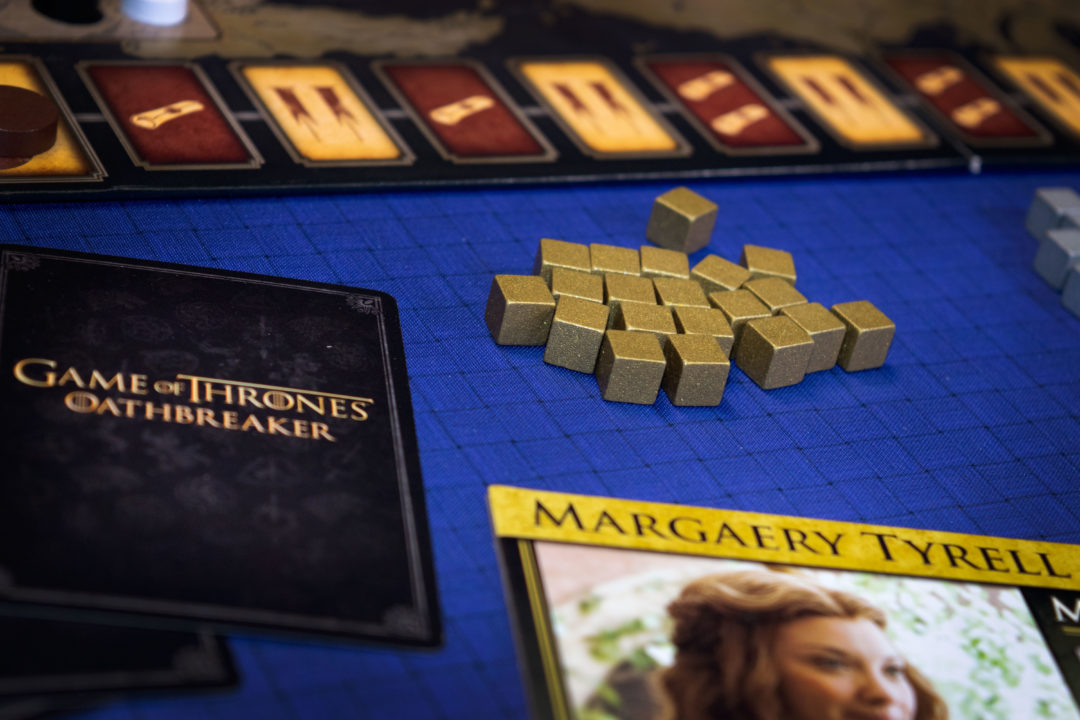 Oathbreaker also seems to have learned from those earlier games and fixed some of their problems. Each noble has their own ability that can be used to do things like draw extra cards or manipulate the missions. None of them are obviously best used by either the traitor or loyalist, though many affect other players so they’re better if you’ve figured out the allegiances of at least one other person at the table.

While most social deduction games rely on producing a consensus about who is a traitor, power in Oathbreaker lies with the monarch. Rather than helping on missions, the ruler issues proclamations and doles out cards to the other players indicating their favor or suspicion. These cards can help give the ruler information about other players or punish or help those whom they feel they already have a read on. The favor and suspicion cards also can bring order or more chaos to the realm at the end of the game depending on whether or not the monarch’s judgment was correct.

That proved extremely important in our game since the traitors were so good at sabotaging missions that Westeros had become a chaotic mess. The loyalists only won narrowly because the queen was perfectly able to deduce the identities of her two loyalists and three traitors. All that sabotage meant I narrowly missed my individual objective, so only the queen and Jorah actually won, though I considered it to have been at least a moral victory.

Like any social deduction game, Oathbreaker tends to involve a lot of shouting and protesting, with things getting as tense as any small council meeting. If you’re looking for a quieter, more tactical exploration of the complex allegiances and military operations involved in the conquest of the Seven Kingdoms, you’d be better off playing Fantasy Flight’s A Game of Thrones: The Card Game. But if like Littlefinger you love a little chaos, Oathbreaker is the best way to fight for the Iron Throne.

Hustlers Review – Escape to the Movies