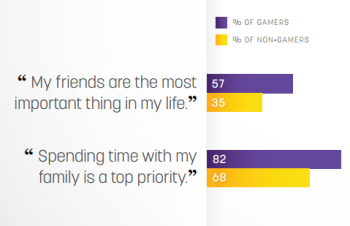 A study commissioned by Twitch shows that the old stereotype of solitary geeks gaming in their basements is bunk.

The stereotype that gamers are lonesome creatures, rejecting human contact in favor of gaming in dark basements, is hard to shake. An extensive study commissioned by Twitch shows just how outdated that stereotype is today. Conducted by LifeCourse Associates, the study found that gamers were more likely to watch television with friends than non-gamers, felt more positively about their future success, and prioritized having a positive impact on society. “The old stereotype of the solitary geek gamer is over,” says Neil Howe of LifeCourse Associates. “It turns out gamers today are more educated, optimistic, socially conscious, and connected to friends and family than non-gamers.” Twitch has released a report detailing the conclusions of the study.

The study surveyed 1,227 people in the US between March 12 and 30, 2014. The ages surveyed ranged from 13 to 64. The survey defined gamers as people who have played a video game on a digital device in the last 60 days. Of those surveyed, 63% were gamers. The study found that non-gamers were much more likely to watch television alone (40% versus 23%) than gamers, and that non-gamers were much less likely to watch video when at a friend’s home (15% versus 42%). Spending time with family and parents was also rated more important by gamers than non-gamers. Spending time with family was a top priority for 82% of gamer respondents, while 68% non-gamers agreed it was a top priority. Gamers and gamer’s parents were found to be more likely to hold a college degree or higher. Gamers were much more optimistic about their careers, with 67% of gamers feeling “very positive” or “positive” about their futures. Only 42% of non-gamers reported the same feelings.

The study also found that gamers are more socially conscious. A majority of gamers, 76%, agreed with the statement “Having a positive impact on society is important to me.” Non-gamers came in 21 percentage points below, with only 56% agreeing with the statement. Gamers were also more likely to support companies that support social causes (58% versus 36%) and were more supportive of companies with ethical business practices (78% versus 65%). Gamers are also far more likely to use recent technology, including gaming consoles, tablets, smartphones, and internet-capable devices for streaming to televisions.

“We know gamers and have witnessed the incredible level of social engagement and excitement that happens on our platform, but there is still this pervasive misperception that gamers are basement dwelling loners and misfits,” says Jonathan Simpson-Bint, Chief Revenue Officer for Twitch. “In order to once and for all eradicate this maligned view of our community, it would require a scientifically verifiable and statistically defensible study from a reputable and experienced research firm. This is what Neil Howe and his team at LifeCourse Associates delivered. The study confirmed what we already expected based on our passionate and positive community which is gamers are social, video is their language and Twitch is their platform.” Gamers can broadcast to Twitch from Xbox One and PlayStation 4, mobile devices, and PCs. This year, Twitch is the official video streaming platform for E3.

Wolfenstein and the Power of Resistance