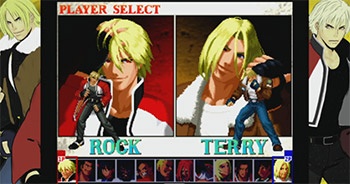 ‘Tis a good week for fans of classic two-dimensional fighting games as SNK Playmore is scheduled to launch Garou: Mark of the Wolves on the Xbox Live Arcade this Wednesday.

Despite its lycanthrophilic title, Garou: Mark of the Wolves actually “marks” the last sequel in SNK’s long-running Fatal Fury series.

As Garou isn’t exactly a Fatal Fury seqel — the only returning Fatal Fury character is Terry Bogard — (nor a sequel to the Real Bout: Fatal Fury side stories) SNK had to craft a quality game if Garou were to have any hope of succeeding in the flailing arcade landscape of 1999.

Luckily for gamers, the resulting title rivals Street Fighter III for aesthetic appeal, and is widely regarded as one of the finest fighting games to ever come from SNK.

Less luckily however, was the game’s relative obscurity. A decade ago, both the arcades and the 2-D fighting genre were falling apart, and as a result many people simply missed this classic fighter altogether.

Come Wednesday hopefully that can be amended, as purchasing Garou: Mark of the Wolves from the Xbox Live Arcade will only set you back $10.

If $10 seems like a lot for a decade-old fighter, keep in mind that SNK Playmore have also cobbled together a handful of additions for this latest iteration including 720p high-definition graphics, online multiplayer gameplay and support for real-time audio chat.

Get Old, Become a Danger in Driver Seat