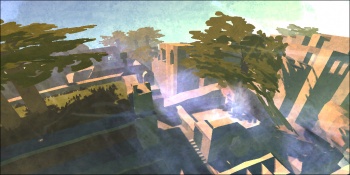 “This is the Game Developer’s Conference – this is not E3 – so my plan is to not actually talk too much about my game. I’m actually going to talk about the process of making a game,” but Eskil Steenberg still pulled a few trees out of the ground, and ran around a bit shooting some energy bullets in his procedurally generated, user modified world, LOVE, the MMO he is single-handedly crafting.

It’s true, though, that the majority of his presentation was focused on tools – tools that he created himself. Moore’s Law is pushing processing speed (and hence graphics) so fast that Eskil has proposed his own law of game development, “Unless you can produce twice the amount of content per man hour every 18 months, you’re screwed.” You can’t just hire people, so you build tools. Everyone focuses on solving the hard problems, but actually the vast majority of your time is spent on pretty mundane things, so if you can get some really good flexible tools going for your everyday activities, it can make your game developing life a lot easier.

Eskil’s slim team philosophy extends to probably firing your designer. “You have 199 people trying to get stuff done and one sucker trying to get more stuff into the pipeline. He’s trying to make that to-do list longer,” to which he adds, “To me, hiring a designer who can’t program or do art is a little bit like hiring a personal shopper with a great sense of fashion but doesn’t have any value of money. So you go and say, ‘Here, go buy an outfit,’ and they come back with a pair of socks like, ‘Oops this is all I got. Sorry, ran out of money,’ and they might be really nice socks, but you know, it’s not an outfit.” Basically, make all your hires multi-purpose. Don’t hire a single uncreative person.

He also thinks you can do away with concept art. Why not make your tools such that by the time you have conceptualized your object, it’s also modeled? That’s precisely how he works, and his tools are all hooked up to a Verse server (as is LOVE) so that when he putzes with an object via his tool, it is affected immediately in-game. Can you imagine working on a network like that where there is no loading the latest build?

Things got pretty technical, but if you’re so inclined, it’s all open source. Eskil is the kind of friendly guy who encourages you to take his tools (one-handed — so that, like Pong, you can operate them properly with a girl or a beer in the other) and be productive, tweak them to your needs, and make cool games. He doesn’t have one for texturing yet because, as for that problem, “In my game, I was smart enough not to have texturing, so…solved!”