This article contains spoilers for the Gears of War franchise.

I’ve come to Gears of War very late. Having heard good-to-great things about the series for the last 14 years, I finally bit the bullet and blasted through all six entries. And they’ve left me feeling numb.

Although I may often prefer it, games don’t have to be clever or meaningful. Sometimes, they can be nothing more than dumb fun. In many ways, Gears embodies that idea. Gruff and grunty soldiers do their jobs in mowing down endless hordes of Othered enemies, and the core gameplay loop is so engrossing that you scarcely think any deeper than that surface level of grisly fun.

That is, at least, until the campaign storytelling gets intrusive and forces you to think about the actions of Marcus Fenix, JD Fenix, Kait Diaz, and all the other members of Delta Squad over the years. At that point, the games gleefully embrace the horrors of total war. They demonstrate — no, celebrate — a loss of innocence, a loss of humanity.

This sentiment isn’t new. Epic’s original trilogy has been subject to much critique of its toxic masculinity, but The Coalition’s run hasn’t suffered from the same kind of scrutiny. Nonetheless, Gears 5 was truly horrifying.

Marcus Fenix is iconic. He’s a big, dumb meathead with a chainsaw gun and a permanently pissed-off attitude, but his lack of depth was a perfect fit for the big, dumb story of genocide that was the original trilogy. He never questioned what he was doing until he realized how it might affect him personally. He didn’t make genocide okay, but he almost made you believe it was justifiable.

Kait Diaz (and The Coalition’s whole approach to storytelling) is different. Marcus’ search for his father in Gears 3 was tied up with Adam’s capacity to end the Locust species. Kait’s search for her mother in Gears 4 has no such ulterior motive. The thread may get lost amidst the mystery of the Swarm, but Gears 4, fundamentally, is about an act of love, no matter how uneasily that theme sits among the hyper-violent gameplay.

With a more in-your-face cinematic narrative approach, the game heralded a change towards tenderness as a virtue in itself. Previously, tenderness was a vehicle for further hatred: Maria’s death fueled Dom’s desire for slaughter, and Dom’s ignoble sacrifice fueled Marcus’ genocidal rage. The shift was far from perfect, but I nonetheless found it encouraging. It was about rebellion, togetherness, the things that make us human.

2018’s God of War refresh gets praised for maturing that series; from a narrative perspective, Gears 4 did the same thing. Gears 5 walks back that progress and, indeed, delves even further into the inhumanity of Sera than any previous entry. That occurs at both the macro and micro levels.

The overarching quest is to reactivate the Hammer of Dawn system, an orbital weapon of mass destruction that laid waste to entire populations during the war against the Locust. The government objects, but the so-called heroes press on regardless. Kait and her squadmates, JD Fenix and Del Walker, could be forgiven for their naïveté. The representatives of the previous generation — Marcus, Damon S. Baird, Augustus Cole, and Garron Paduk — can’t be. They lived through the devastation and, in Gears 3, saw firsthand the mental and emotional toll the weapon’s use can have on those left behind. The old guard expresses reservation but supports the cockamamie plan anyway. 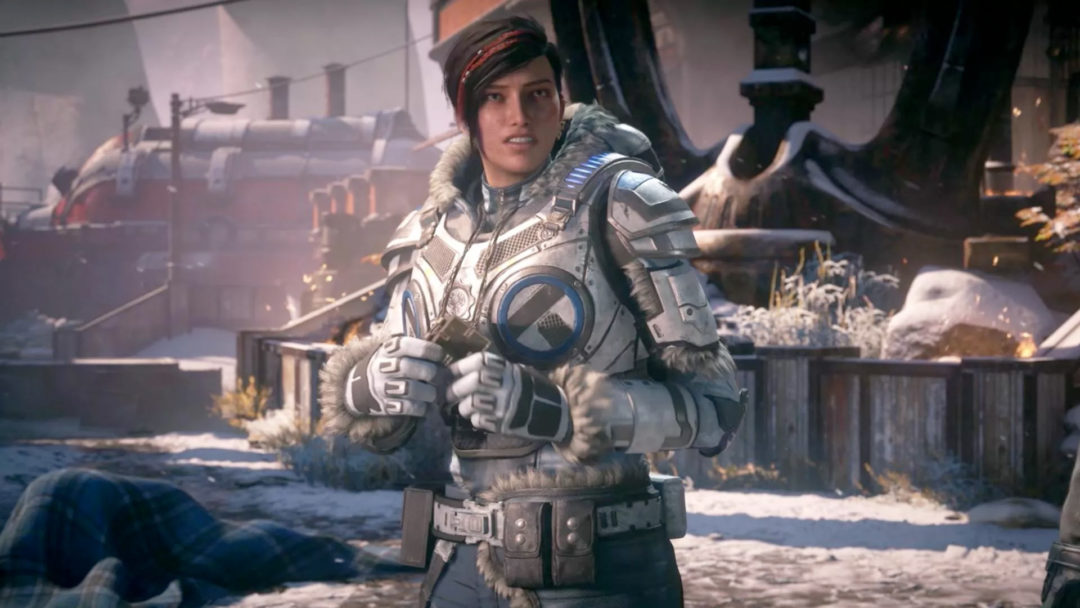 The characters refuse to look back, focusing only on the present situation. Curiously, that’s thematic of the gameplay also. Many of the Gears 5 locales are introduced with a walking-sim ethos, as the player soaks in their surroundings. An inciting incident follows, and they must fight their way back out along the paths they’ve so leisurely strolled upon. Afterwards, there’s no time for reflection. A cutscene, maybe, but the destruction and chaos left in the wake of battle are swept under the carpet. Don’t think about the consequences. Or, if you do, blame the Swarm for coming. Thus, genocide is justified.

Never mind that E-Day and all the horrors that followed were caused by humans.

In highlighting that series of events, Gears 5 takes a hardline stance against gentleness. As much as Niles Samson’s genetic experiments are the reason for the Locust’s existence, their determination to annihilate humanity stems from Queen Myrrah’s human emotions. Myrrah’s maternal love for her daughter became a poisoned chalice when her daughter was supposedly killed. The loss drove Myrrah to despair and anger, which she later channeled in her destruction of the Mount Kadar Research Facility and subsequent decision to take over the surface by force rather than share it through diplomacy. Affection is cast as a source of evil.

Meanwhile, for Kait, Gears 5 is a lesson in hardening her heart and cutting herself free from emotional bonds in a way that Myrrah was incapable of doing. The end of Gears 4 had Kait killing her mother, Reyna, in an act of mercy. That done, she must go on to sever the emotional connection that manifests through her Locust ancestry.

The Locust and the Swarm are a hivemind, and their genetic memory holds the residual psyche of Myrrah. Kait suffers as an offshoot of that hivemind. Her desire to be free of pain leads her to kill a Locust called the Matriarch, in a blatant reinforcement of the negative appraisal of motherhood. Kait is freed from the psychic link and killing the mother is rewarded. However, Kait must still confront a revived and transmogrified Reyna, now queen of the Swarm, following in the footsteps of her own mother.

Seeing Reyna as a ravening beast and having to sacrifice one of her best friends severs the last thread holding Kait to her humanity. As the game ends, after a gloriously stupid final battle, Kait is as jaded as Marcus ever was, determined to wipe out the Swarm entirely. The tenderness that drove her through Gears 4 became an enemy to be vanquished in the sequel.

The inevitable Gears 6 may yet surprise us, walk back the anti-emotional messaging, and have Kait become the bridge between the two species, but that seems unlikely at this point.

Does it have to? Of course not. Gears 6 can be another big, dumb genocide story, and many people will still love it as long as it delivers the compelling gameplay that the franchise is known for. There’s nothing wrong with that.

But if The Coalition wants to make good on the implicit promise made in shortening the franchise’s name from Gears of War to just Gears, it needs to focus on the human element. If The Coalition wants to successfully supplement Gears of War’s compelling core gameplay with engaging, cinematic narratives, it needs to find a gentler story to tell than justification for genocide and advocacy for the eradication of tenderness.

Saints Row: The Third Remastered Is a Thing That Exists Now

10 Fantastic Indie Games Not to Miss on Xbox Game Pass