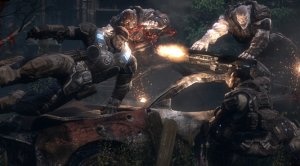 Gears of War 2 will feature ‘linked Achievements,’ meaning that Achievements earned in the original Gears will help unlock bonuses in the sequel.

Epic’s Cliff Bleszinski took the stage at Comic-Con to demonstrate to a live audience the E3 Sinkhole level and describe a new “linked achievements” feature for Gears 2 where achievements unlocked in the first Gears game would open features in the upcoming sequel.

He offered three examples of how the system would work:

Questions such as whether all Gears of Wars achievements will be linked to the sequel and what other goodies can be grabbed besides characters won’t be answered until closer to the game’s November 7 release.