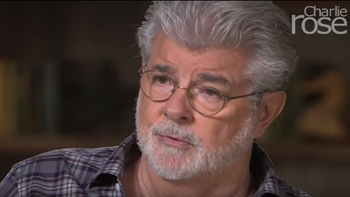 George Lucas discussed Star Wars with Charlie Rose, saying “I sold them to the ‘white slavers.'”

Update: Lucas has issued a statement apologizing for referring to Disney as “white slavers.”

“I want to clarify my interview on the Charlie Rose Show. It was for the Kennedy Center Honors and conducted prior to the premiere of the film. I misspoke and used a very inappropriate analogy and for that I apologize.

I have been working with Disney for 40 years and chose them as the custodians of Star Wars because of my great respect for the company and Bob Iger’s leadership. Disney is doing an incredible job of taking care of and expanding the franchise. I rarely go out with statements to clarify my feelings but I feel it is important to make it clear that I am thrilled that Disney has the franchise and is moving it in such exciting directions in film, television and the parks. Most of all I’m blown away with the record breaking blockbuster success of the new movie and am very proud of JJ and Kathy.”

Original Story: In a recent interview with talk show host Charlie Rose, Star Wars creator George Lucas made a number of statements about his feelings on The Force Awakens, how he felt he was treated by the franchise’s new owners at Disney, and at one point even compared the company to “white slavers.”

When discussing his lack of involvement with the franchise now, Lucas said: “I’m just going to cause trouble, because they’re not going to do what I want them to do. And I don’t have the control to do that anymore, and all I would do is muck everything up. And so I said, ‘OK, I will go my way, and I’ll let them go their way.'” He then compared the situation to a breakup, saying that there are certain “rules” after a breakup: No phone calls, don’t drive past their house or go to their coffee shop, because you’re “opening the wound again.”

Lucas says that the movies “are my kids. I loved them, I created them, I’m very intimately involved with them and I sold them to the white slavers that take these things, and…” Lucas laughed off the rest of the sentence, and Rose quickly jumped into a new question.

Lucas also did not like the “retro feel” of The Force Awakens, saying “I don’t like that. Every movie, I worked very hard to make them different…different planets, different spaceships to make it new.”

You can watch the full interview here.

Star Wars: The Force Awakens has broken a number of records since its December 18 release, including reaching one billion dollars in worldwide ticket sales after only 12 days in theaters. The film still has not been released in China, the second largest film market in the world.

Oculus Touch Controllers Delayed to Second Half of 2016