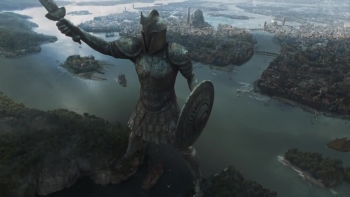 A full chapter from The Winds of Winter, the sixth book in the A Song of Ice and Fire series, is now available to read on author George R. R. Martin’s website.

Author George R.R. Martin has released an excerpt from the upcoming sixth book in the A Song of Ice and Fire series. The sixth book is titled Winds of Winter and does not yet have a release date, as Martin has not finished writing it. The excerpt is a full chapter from Winds of Winter, titled ‘Mercy’. The chapter was posted with an image of the Titan of Braavos. Here’s an quote from the chapter, which starts off in what seems to be fairly violent locale:

She woke with a gasp, not knowing who she was, or where.

The smell of blood was heavy in her nostrils… or was that her nightmare, lingering? She had dreamed of wolves again, of running through some dark pine forest with a great pack at her hells, hard on the scent of prey.

Half-light filled the room, grey and gloomy. Shivering, she sat up in bed and ran a hand across her scalp. Stubble bristled against her palm. I need to shave before Izembaro sees. Mercy, I’m Mercy, and tonight I’ll be raped and murdered. Her true name was Mercedene, but Mercy was all anyone ever called her…

The full chapter is available on Martin’s website, which seems to be handling the rush of traffic so far. Martin comments on his website that the “new chapter is actually an old chapter. But no, it’s not one I’ve published or posted before, and I don’t even think I’ve read it at a con (could be wrong there, I’ve done readings at so many cons, it all tends to blur together).” Martin says, “So it’s new in that it is material that no one but my editors (well, and Parris, and David and Dan, and a few others) have ever seen before, but it’s old in that it was written a long time ago, predating any of the samples that you have seen.” Martin previously released a chapter from Winds of Winter in 2011, from the perspective of Theon Greyjoy.

The series will end with the seventh book, titled A Dream of Spring, though fans have worried that the HBO series might outpace Martin’s ability to complete the novels. The show creators told Vanity Fair that they have heard Martin’s plans for every character, including who finally takes the Iron Throne, so that they can “lay the groundwork for it” as the show catches up to the books. The series returns for season four on April 6. If you’re looking for a refresher, check out The Escapist’s Game of Thrones Abridged videos.

Full Official TMNT Trailer Is A Triumph Of Incomprehensibility