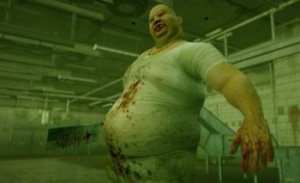 It turns out that zombie-meister extraordinaire George Romero apparently knows nothing about the current legal tussle between Capcom and the MKR Group over the Dead Rising videogame.

The tale begins early in the year, with discussions between the MKR Group, which holds the rights to theDawn of the Dead movie, and Capcom, developer of the Dead Rising videogame. MKR claimed the game treads too closely to Dawn of the Dead, which prompted Capcom lawyers to launch a lawsuit seeking a declaratory judgment that the company had not violated MKR’s copyright on the property. The effort didn’t work out too well; soon after, MKR Group launched its own suit, claiming Dead Rising is an “unlicensed adaptation” of Romero’s classic.

“Both works are dark comedies,” the complaint said, according to a Reuters report. “In both, the recreational activities of the zombies and absurdly grotesque ‘kill scenes’ provide unexpected comedic relief. Both works provided thoughtful social commentary on the ‘mall culture’ zeitgeist, in addition to serving up a sizable portion of sensationalistic culture.”

While the two companies duke it out over who’s allowed to do what with zombies in shopping malls, the man who started the whole thing seems to have no clue what’s going on. A Kotaku reader took his copy of Dead Rising to be autographed by Romero at the Chicago Horror Convention this past weekend, and discovered the director was unaware of the lawsuit, or even of the existence of Dead Rising itself.

“I went to a horror movie convention here in Chicago on Sunday because George Romero was due to show up for autograph signing and I was hoping he could grace my copy of Dead Rising with his signature (not expecting that he would at all),” he said.

“Lo and behold he actually did, and on top of that, he was not even aware of Dead Rising… I had to explain to him what it was and he was happy to sign it,” he continued. “Makes me wonder if he is even aware of the legal battles Capcom has had to endure.”

Romero is a legend among horror and zombie movie fans for his long-term and highly successful association with the genre. 2008 marks the 40th anniversary of the launch of his career, which began with the 1968 classic Night of the Living Dead; since then, he has written and directed numerous movies but remains best known for his work with zombies in films including his masterpiece Dawn of the Dead, as well as Day of the Dead, Land of the Dead and Diary of the Dead.