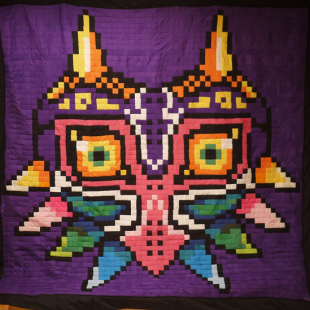 A few weeks ago my wife and I went shopping for a new comforter. After years of cat-driven wear and tear, our old one had finally reached its breaking point. Hoping to find a replacement we loaded our daughter up into the car and headed down to Bed Bath & Beyond where we found a pretty decent deal. Thrilled by the bargain, I’ve since spent the past few weeks basking in that special glow that comes to cheapskates like me when they get something good for less. Then the internet had to go ruin it by showing me just how awesome a comforter can actually be.

More specifically, I stumbled onto Megan Healey’s Etsy store. A full-time quilter and seamstress, Healey focuses her time and talents on taking imagery from beloved video games and turning them into awesome nerd-centric bedding. Healey began making her game-themed bedding back in 2012, after her boss “made the mistake” of asking to take on a sewing project that had her sewing eight hours a day for an entire week. Realizing how much she loved it, she decided to become a “full-time quilter.” Included among her various products are quilts, comforters, blankets and pillow cases inspired by beloved titles such as The Legend of Zelda, Metroid, Pokemon, Super Mario, Minecraft, Metal Gear Solid and more. While each is priced individually, they seem to standardly run between about $150-300.

Just looking at her work, I feel safe in saying that she made the right choice. While the prices of her handmade products might be too high for some, there are plenty of gamers out who would pay an arm and a leg for the ability to cuddle up beneath a map of Hyrule every night. Hoping to learn more about her work, I’ve out reached to Healey through her Etsy page. While we wait for her response why don’t you guys take a gander at some of her goods and let us know what you think?