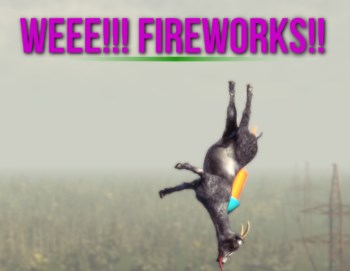 Coffee Stain Studios says the runaway piracy of Goat Simulator is a “hilarious” achievement that may actually be good for the game in the long run.

The number-one title on The Pirate Bay’s list of most popular video game torrents is Minecraft; number two, ahead of Dark Souls II, Call of Duty: Ghosts, Bound By Flame and everything else floating around out there, is Goat Simulator. And that’s okay with Coffee Stain boss and programmer Anton Westbergh, who described the situation as “really hilarious.”

“I think it’s kind of an achievement,” he told PCGamesN. “My first reaction was ‘Hooray! We’re top on Pirate Bay. From the launch up till last week we’ve been in the top. I don’t know how many copies that is but [it’s a] heck of a lot of copies definitely.”

Westbergh said he doesn’t want to encourage people to pirate Goat Simulator since the goal is to actually sell the thing, but he views the high TPB ranking as a measure of interest and said that people who torrent the game probably weren’t going to buy it anyway – at least not at first.

“What we try to do with our games is maintain them with lots of updates,” he said. “We hope that if people really like our games they’re going to convert into paying customers. If you get it from The Pirate Bay you won’t have all the latest updates. I don’t know if you can use the workshop but there’s lots of things that you can only access if you have the real product.” To that end, he added that an update is coming later this month that will implement split-screen co-op play and “other cool stuff.”

And in spite of its popularity among people who don’t want to pay for it, Goat Simulator has apparently been a real success story for the studio. Prior to its release, Coffee Stain was under some pressure to wrap up its next project in less than a year, but “it’s pretty safe to say we have a bit more than a year now,” Westbergh said. “It’s really nice.”

Why You Should Be Watching Orphan Black: A Season One Recap