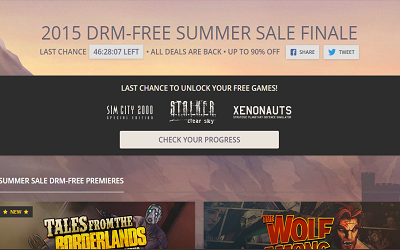 GOG is ending its 2015 Summer Sale with a two-day finale that will bring back all of its bundles and bargains.

Back at the beginning of June, GOG launched its annual Summer Sale, discounting games new and old alike. Having run for more than two weeks however, its finally time for the sale to end. That being the case, the digital retailer has announced that it will be capping off the event with a two-day finale that will bring back all of the site’s best bargains so customers who missed them the first time will have a final opportunity to bask in their gaming goodness.

What this means more specifically is that for the next 48 hours GOG customers will be able to pick and choose from more than 40 bundles and 700 games featured during the sale. Gamers interested in picking up some bundles, for instance, can snag great deals on the Wing Commander series, the Rayman games, the Ultima franchise and Telltale’s Walking Dead, Wolf Among Us and Tales From the Borderlands adventures, among others. Gamers looking to snag individual titles will also find great deals on games like Legend of Grimlock 2 and Wasteland 2, both of which have had their prices slashed by more than 50 percent.

As with the rest of the sale, any money spent during the finale will be tallied up and counted toward a separate deal rewarding GOG customers with free games if they reach certain milestones. Players who spend 50 dollars or more, for instance, will get to take home free copies of SimCity 2000, S.T.A.L.K.E.R.: Clear Sky and Xenonauts. The sale will come to its final close at 8AM EST on Sunday, June 21st.