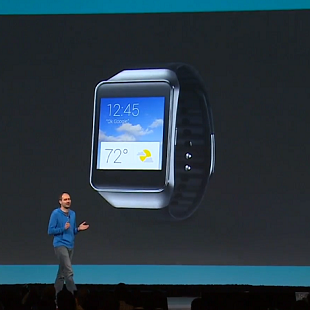 Android is improving on your phone and tablet as it invades your TV and car.

The Google I/O 2014 keynote is in the books, and the presentation was bursting with new Android hardware and software. And for the first time, it seems like Google has a cemented global strategy for its mobile-going-universal platform.

There’s still no delicious codename (no Abba-Zaba, no Lollipop), nor is there a definitive 5.0 or 4.5 number designation, but Google did show a preview of its next “L” Android release. The new release does have a number of under-the-hood improvements, as we talked about yesterday, but there’s a surprising number of design changes coming to the mobile OS as well.

Clean, simple font and grids now dominate Android, and the touch buttons have also been redesigned — no more arrow for back, just a simple triangle, for example. But font and placement is only half the story, as Google is also introducing a new Material Design toolkit that will add depth, elevation, and perspective to the OS, and applications.

Google is also pushing a unified style guide out to developers (see it here), which should make for similar-looking typefaces and grids across apps from all developers, big and small. While it’s yet to be seen how many developers will conform to the Google style, the option is there, at least.

Under the hood, “Android L” runs completely and solely on Google’s new ART runtime — so long, DALVIK! And the OS update will also support 64-bit processors. Other previewed changes include new heads-up notifications, a retooled recent apps look, and personal unlocking — the device knowing automatically when in the hands of a trusted user.

Google spent much of I/O talking about how it’s expanding Android beyond the phone and tablet, and Android Wear is the first step in that direction. We’ve known about Android Wear for a few months now, but I/O served as the first live preview of the hardware and software. LG’s G Watch, Samsung’s Galaxy Gear Live, and Motorola’s Moto 360 were all on display, running app and OS demos. Key features were outlined, like Android installing apps found on your phone onto your Android watch automatically. All of the expected functionality is there, too, including sending SMS messages through your phone from your watch, water resistance in all mentioned models, and a heavy emphasis on “OK Google” voice commands. The LG G Watch and Samsung Galaxy Gear Live will both be available on the Google Play store later today, while the Moto 360 is coming “later this summer.” 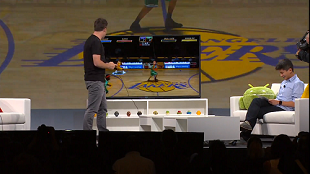 Android is also, finally, doing a proper expansion into the car, and onto your television. Android Auto will see Google pair your phone with new cars, starting before the end of 2014. The program is very phone-heavy, as everything presented on your car’s in-dash display is grabbed from your Android phone of choice. Input through the car (knobs and dials, touchscreens) will still work, so your phone acts as the brain in the operation. It’s also very voice-heavy, as Google demoed sending messages hands-free, along with navigating to a destination without thumbing around on the phone or car display.

Android TV is the last component of Google’s Android Domination scheme, as it will be present on TVs from Sony, Sharp, and Philips in 2014 and 2015. Android TV is Google’s take on the Smart TV, often custom-made by TV manufacturers, but with your Android phone playing an integral role. Your phone acts as a voice remote of sorts (something easily duplicated by a TV with a built-in mic, I’m sure), and the demo showed navigation through Android apps and games, like Netflix, live TV, and NBA Jam.

On top of Android TV being baked into television sets, companies including Razer and Asus will be releasing standalone streaming boxes later this year.

We’ll have deeper, Jack Handey-er thoughts on all things Google I/O later this week. In the meantime, drop your thoughts on today’s news in the comments.