Disclaimer: The designer of Adventurer Conqueror King is Escapist co-founder and current General Manager Alex Macris. The co-designer is former Escapist EIC Greg Tito. The owner of Bundle of Holding is frequent Escapist contributor Allen Varney. Josh Vanderwall, Erik Jacobson, and numerous other current and former staff members were playtesters of ACKS. It’s hard to imagine something we could be less objective about, really. 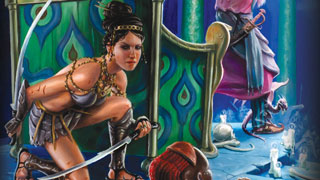 The newest Bundle of Holding lets you grab most of the Adventurer Conqueror King system for one low price.

Autarch’s fantasy roleplaying game, Adventurer Conqueror King, gives you all the tools you need to build and run your own fantasy campaigns. The system has the feel of classic roleplaying games, while adding rules for building strongholds, ruling your domain, and much more.

The official description of the system reads, “Autarch’s Adventurer Conqueror King System fulfills the promise of the original fantasy role-playing game by providing comprehensive, integrated support for play across all levels of a campaign.”

Sounds like something that’s up your alley? If so, then head over to the Bundle of Holding site and get set to stock up on all the books you need.

The bundle offers two tiers. First, for $9.95, you get all of these books:

If you beat the threshold price of $19.71, you can level up your bundle and add the Bonus Collection, which includes all of the following:

You can check out more information on all of these books, as well as grab your bundle, over at the official Bundle of Holding website. Want to know more about Adventurer Conqueror King? Visit the Autarch website.

There’s an Official Resident Evil Candle, and no, it Doesn’t Smell Like Blood

8 of the Most Inspirational Leaders of All Time