Petroglyph Games has been making real-time strategy titles for basically a decade at this point, and the team behind the studio has multiple decades of combined RTS experience, dating all the way back to the game that coined the term “real-time strategy;” Dune II. I grew up on Dune II, then WarCraft and Command & Conquer, then, of course, StarCraft. The Petroglyph team is actually founded by former Westwood Studios folks, responsible for half of that list of some of the most recognizable RTS games ever made. I didn’t actually know all this when I went into Grey Goo, so I was, frankly, shocked to discover just how well it turned out. In hindsight, it’s not much of a surprise. This is a remarkably well-versed team with ties to the very genesis of the genre as a whole.

The first thing you’ll notice when you launch Grey Goo is the remarkable production quality. The voice acting is top notch, the cinematics are gorgeous, and the characters are written such that they’re easy to relate to in a “if I was part of an interplanetary race” kind of way. Even outside of the traditional cinematics, you have the same high level of production on the mission briefs, with beautifully rendered characters speaking through thick South African accents, which at once lends familiarity and intrigue at the alien nature of the voices. Of course, if you know the accents, you’ll probably just get the “familiar” part of that.

Before we dive into the game itself, the backstory warrants some attention because of just how thoughtful the narrative of Grey Goo actually is. It’s not just an RTS for its own sake. It’s a tale with lessons to be learned about playing God, and, ultimately, about taking responsibility when things go awry. This is all available on the official site, but if you’re avoiding spoilers entirely, skip to just past the next image, and I’ll try to avoid any mention of spoilers later on.

Over a century ago, humans created the Pathfinder program, designed to explore the distant reaches of the galaxy and report back on its findings, since humans are themselves so short lived. It should be noted that “Grey Goo” is actually a hypothetical end-of-the-world scenario involving self-replicating nanomachines. and is very clearly the core concept of the Goo race. Instead of shutting down when the humans scrapped the project, the AI evolved into something else entirely. Rather than its original mission of “Explore. Gather. Report,” it’s moved into much more destructive methodology, which more or less involves consuming everything in its path. The humans eventually realize that humanity’s very existence is being threatened by something of its own creation. Lessons learned, right? 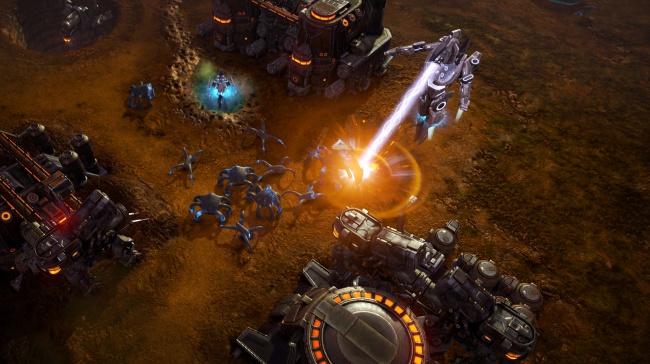 You’ll start Grey Goo‘s campaign as the Beta race, which is a pseudo-humanoid, bipedal warrior race, who have been collecting a resource – “catalyst” – on a newfound planet rich with the stuff. Beta, like each other race in Grey Goo has a very distinct base-building feel. Instead of having multiple separate buildings, you’ve got to attach almost everything to a Hub. Once you’ve filled up the slots on your Hub, you’ll have to build a new one to continue developing your base, which also usually means it’s time to expand to help acquire more resources more quickly. The factional differences seems heavily focused on the base building, much more so than the units themselves, which is a bit of a departure from the likes of StarCraft, where there’s a more even mix of uniqueness.

As you develop your Beta bases, you’ll get access to larger and larger Hubs, which can accommodate more tech buildings, more factories, more everything. The largest Hub size is the only way to build the Beta Epic Unit, which we’ll touch on later. Beta as a whole is dependent on having several bases of increasing size, rather than one primary base with several satellite bases supporting it. Unless you take the tact of simply building an additional hub near your starting base, you’ll be more or less forced to expand rapidly, if only to keep your resource collection rate on par with your expenditure rate, once you build your first Large Factory, which can produce three units simultaneously.

Next, you’ll play as the Humans, which is also incredibly unique with its base construction. More or less completely opposite of the Beta base structures, the Humans get a single base to work with. If you lose your home base, you’re done for, since every building must be connected via power conduits to your core structure. It’s reminiscent of the Protoss Pylon setup in StarCraft, only significantly more restrictive, since your conduits don’t provide power unless they’re connected to your base.

Expanding to another resource node with Humans is simple enough, but can be incredibly dangerous to enact if your opponent has more control over the map than you, since you’ll need to scout the resource node with units before you can construct a second refinery, which will allow you to construct the extractor – the only building that doesn’t need to be on the grid – in order to collect the resources. It’s imperative to get your units out there early with Humans, in order to find and protect the nearby resources from enemies. If you get stuck with just one node, you’re in a lot of trouble.

Finally, there’s the titular Goo race. The Goo has the steepest learning curve, no doubt, but also strikes me as having the greatest potential for skilled players to put it to good use. Instead of a stationary base, your base of operations is a highly mobile Mother Goo unit. It’s able to traverse otherwise impassable terrain, making it surprisingly easy to get it out of a tough encounter alive, and making them incredibly difficult to track down and eliminate. You can have something like 10 Mother Goos active at one time, each of which can collect its own resources, spawn its own units, and consume its own enemies. 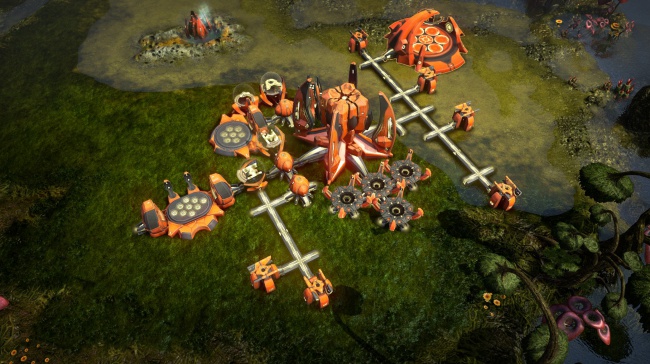 Mother Goos sit on top of resource nodes, absorbing the resources and growing larger over time. Once you hit certain size thresholds, you can split into a Small Protean, a Large Protean, an identical Mother Goo, or a Tech Upgrade. Of course, once you’ve got four or five Mother Goo units oozing around the map, managing them all effectively gets to be incredibly challenging, but it also seems to be the only way to keep your opponents in check, so playing as the Goo is definitely not meant for new players.

Aside from the novelty of the races, Grey Goo actually innovates gameplay in a number of ways as well. One of the most important distinguishing features is the resource collection and consumption process for Beta and Humans. You’ll build a refinery and collector, much like Vespene Gas collection in StarCraft, but instead of staffing the collector yourself, it automatically generates your farming units for you, with the number of units created (and maintained, in case some of them get destroyed) is dependent on the distance between the refinery and collector buildings. This is particularly important for Humans, since they’re operating all collection out of their home base, making this distance sometimes incredibly long.

Consumption of resources is particularly interesting, as constructing a building or unit doesn’t take a lump sum from your resource pool, instead taking resources over time for the duration of the construction process. The resource cap is kept deliberately low to prevent stockpiling, though you can build Silos to increase the cap. The best bet in my experience, however, was to just never stop building so you don’t hit your cap.

Collection comes in anywhere from 8 to 13 resources per second per refinery. Once you’ve started building multiple units at a time, though, this is immediately insufficient. If you’re not careful in managing your resource flow, of course, you’ll find yourself with several things in production at the same time, only to run out of resources, and have construction halted for all of them. 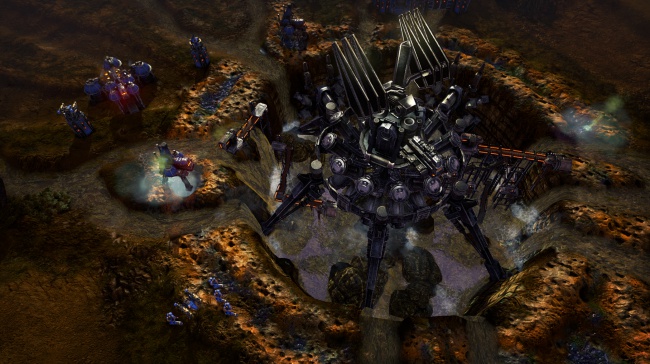 The idea of Epic Units is new to me, since my modern RTS experience is mostly limited to StarCraft II, though I understand it’s not entirely novel in the genre. I can say, however, that Grey Goo‘s Epic Units absolutely live up to their title. The Beta gets Hand of Ruk, which is an enormous mobile factory, equipped with devastating mid-to-long-range rockets, as well as several positions for you to mount defensive units on for close range combat. The Humans can build the Alpha, which might not produce its own defensive units, but is absolutely devastating in combat. It has anti-air and anti-ground capabilities, including the biggest, baddest laser beam I’ve ever seen. Imagine if StarCraft‘s Yamato Cannon blast lasted a couple seconds, rather than a single burst. It traces a path of utter destruction on the ground where it hits.

Finally, the Goo gets to morph a Mother Goo (or multiples, if you’ve got extras oozing around) into Purger, which is quite as destructive as the other races, but has the unique advantage of being able to climb impassable terrain, so you can tuck it safely in a mountain range and rain death down upon enemies of the Goo. Lacking anti-air capabilities, you’ll need to defend it from airborne units, but it can be positioned such that ground units can never really reach it, so a solid air defense will keep it around for a good long while.
Grey Goo tells a tale you’ve probably read in novel or short story form at some point in your life , but tells it in such a new and unique way that it’ll seem entirely fresh to you. It encapsulates the essence of the genre with a focus on resource flow management and base building above the micromanagement of troops. It has some issues, like peculiar difficulty spikes in the campaign missions, and particularly finicky placement for Humans because of the conduit system, but they’re so few and far between that it doesn’t really detract from the otherwise entirely enjoyable experience.

Bottom Line: Grey Goo is, frankly, fantastic. From the opening scenes through the entire narrative thread of the campaign, you’ll want to improve your game if only so you can see what happens next as quickly as possible.

Recommendation: If you like other games in the RTS genre, you should definitely try Grey Goo. If you’ve never played an RTS, this is as good a place to start as any. If you hate RTS, at least find and read the story spoilers somewhere.