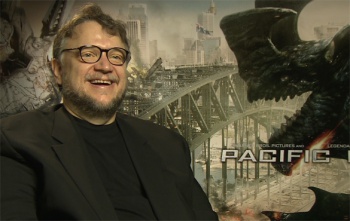 Director Guillermo del Toro reveals that he wants to make Pacific Rim 2 as “multicultural” as possible,” and to make characters from many nationalities or gender “equal in the scope of the adventure.”

Just last month, Director Guillermo del Toro and Legendary Pictures confirmed that Pacific Rim 2 is scheduled to hit theaters in April 7, 2017. While that might be a good three years from today, that hasn’t stopped people from asking del Toro on his plans for the Kaiju-filled sequel. Speaking to the Wall Street Journal, del Toro was asked what fans can expect in Pacific Rim 2, and while he obviously can’t divulge spoilers, he did let on that the two movies are “very different from each other.”

We are three years away, so to spoil anything would be fantastically silly of me. What I can tell you: [screenwriter Zak Penn] and I really went in, we started with [screenwriter Travis Beacham] about a year and a half ago, kicking ideas back and forth. And, admittedly, I said to Zak, let’s keep kicking ideas till we find one that really, really turns the first movie on its ear, so to speak. (…) It was hard to create a world that did not come from a comic book, that had its own mythology, so we had to sacrifice many aspects to be able to cram everything in the first movie. Namely, for example “the Drift,” which was an interesting concept. [Then there was] this portal that ripped a hole into the fabric of our universe, what were the tools they were using? And we came up with a really, really interesting idea. I don’t want to spoil it, but I think at the end of the second movie, people will find out that the two movies stand on their own. They’re very different from each other, although hopefully bringing the same joyful giant spectacle. But the tenor of the two movies will be quite different.

In the same interview, del Toro was asked whether we should expect new characters in Pacific Rim 2. Short response? It’s a yes.

I’m hoping to bring the same idea I had in the first movie, that was to make it multicultural and humanistic as much as possible, to make characters from many nationalities or gender, to make them equal in the scope of the adventure, in the day-to-day of the adventure. So, we’re bringing a few characters that are new and hopefully doing good work managing those that survived the first movie. (laughs)

The famed director finishes by saying it takes nine months to design a movie like Pacific Rim 2; and adds that they are “creating some new jaegers and a lot of new kaiju” as well, with del Toro and the outfit set to start designing the production this August.

Frozen Gets the Game of Thrones Treatment in Mashup Trailer