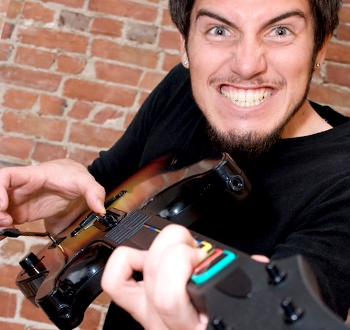 Guitar Hero and Rock Band are two of the biggest names in the industry right now, but it wasn’t always this way. Before these games could be more than a pipe dream, someone had to invent the tech – a man named Tod Machover.

It’s hard to imagine life – or, rather, a videogame industry – before Guitar Hero. The game, and others with similar names and concepts (Rock Band, DJ Hero), have taken the industry by storm. But how did it come to be in the first place? The technology and the concept seem so obvious in hindsight, but as Ronald Meeus relates in Issue 221 of The Escapist, it was a long road to get there:

On the surface, Guitar Hero is as simple as any of the other devices the duo had made under Machover’s tutelage: The player presses one or more colored buttons situated on the neck of the ersatz guitar while simultaneously strumming a simulated string on the body of the instrument. Then the game’s software translates that gesture into a recognizable rock guitar lick.

More fundamentally, however, Guitar Hero turned the principle of Rigopulos’ original Seed Music System upside down. The game requires the player to produce the right intentional, semi-musical actions at the right time in order to stay in line with the music, not the other way around. “The core software of Guitar Hero, based on the Seed Music System, breaks an existing piece of music down into several music sequences,” Machover explains. “It’s still a matter of simple actions resulting in elaborate music sequences, but the player has to press the right buttons.”

In the end, not only did Guitar Hero take the world by storm, it changed how many gamers and non-gamers alike view music. We see the parts that make up the whole, and the game makes us feel like rock stars. To read more about the ideas that eventually birthed Guitar Hero, check out “Anyone Can Play Guitar” by Ronald Meeus[/a] in Issue 221 of The Escapist.