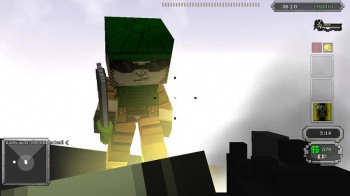 Minecraft has garnered quite the following, having sold over ten million copies on PC alone, in addition to being ported to multiple other devices, and in doing so has launched more than its fair share of clones. Many of these clones are forgettable, being basically cheap knock-offs of the original, but Guncraft is an exception.Guncraft takes the core idea of Minecraft, placing and destroying blocks in a pixelated world, and turns it on its head. Imagine Minecraft as a first person shooter where you have the ability to place blocks in the midst of a gun fight to divert attention and give yourself some cover, or, perhaps, just to be a troll.

The gameplay is much like other shooters where you pick your loadout, drop into a match and shoot your way to victory. You can create custom classes with the pre-set guns and different bonuses, like the Combat Bonus which can give you a boost to your sprinting or damage,, which will be familiar to anyone that has played Call of Duty. While in multiplayer there is the “Build” mode which you can switch to while in battle with a keystroke, this swaps your loadout so you can add or subtract from the map as you like. If there’s something in your way, just destroy the component blocks to remove it. If you need some cover, just build yourself a shiny new bunker. Keep in mind that this game takes a page from the Battlefield playbook when it comes to demolition; the world is not static and can be destroyed with gunfire, explosions, or even your melee weapon. Very few games let you interact with your surroundings on this scale, which makes Guncraft stand out.

The game modes vary from the standard “Free For All” and “Team Death Match” to Guncraft‘s version of Zombie Mode, “Onslaught,” which can be played single or multiplayer. Onslaught pits you against wave upon wave of baddies in the form of robots, from the humanoid variety to the 8-legged arachnid type. You’ll have to fight off the rogue robots in order to survive, it can be quite difficult, as the blocks are just as easily destroyed by the robots as they are for you. So as they’re coming right at you they’re leaving nothing but destruction in their wake. It is doable in single player, which can be frustrating, but you should probably stick to multiplayer. It can be terrifying as you’re running for your life, too afraid to look behind for fear that they’ll be there ready to explode or shoot you.

Guncraft isn’t all about the multiplayer game, they have quite a few things to keep you busy when you’re flying solo. You are able to create custom maps and guns, which could take hours to put together depending on what you’re crafting. The thing you’ll love about these features is that they help keep you immersed in the world. 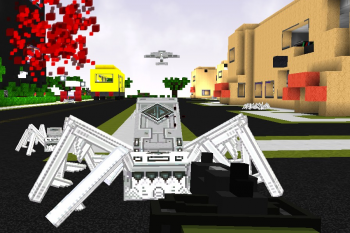 You can start with a completely blank slate and build your map from there or, if you need a canvas to work with, you can build off of some basic preset lands. You also have the option to do a Prefab map, where instead of having to construct every building on your own; you are given a chance to flesh out the map with prefabricated buildings. Once the world you have created has been saved you can then use it for a LAN battle or take your creation online for the masses.

Gunsmithing is another option worth checking out, as it’s just the sort of thing that perfectly melds the FPS with the Minecraft blockiness. You can use all of your block placing prowess to create a gorgeous weapon, but ultimately the looks are secondary, and you will need to give your weapon some stats. You’re only given a set number of points to distribute, but you use them to completely customize your weapon, from the spread of the projectiles to the amount of damage you can do to your enemy. Sadly, it’s too easy to waste your points on attributes that may seem like they would be helpful, but in reality don’t make that much of a difference.

The more advanced controls may take a little bit of time to get used to. Guncraft is similar to most PC games in that WASD are used for movement. Unless you’re particularly dexterous, however, you’re likely going to have to take your hand off of the main keys to perform more advanced actions, which can be a distraction, although it doesn’t really detract from the experience. Though throwing a grenade or reloading can sometimes get you killed by stopping you from running from your impending doom, once you’re comfortable with the controls, you’ll be doling out headshots left and right.

Guncraft isn’t flawless. The multiplayer, since many servers are hosted by other players, can be quite laggy. Be prepared to miss a number of your shots and even drop from the game entirely on occasion. If it proves to be too much of a problem, however, you can always just host your own game. Aside from the lag, the game delivers on everything that it promises. The developer has been very good at communicating with their community throughout the development of Guncraft which is probably why the game isn’t riddled with bugs.

Bottom Line: The things that Exato has done to make Guncraft different from its predecessors have made it a better game. Instead of a clone, they’ve stepped up and made an engaging game that lets you get your block-building and headshot fix at the same time.

Recommendation: If you’re a fan of Minecraft and any of the AAA first person shooters, then Guncraft is the game for you.