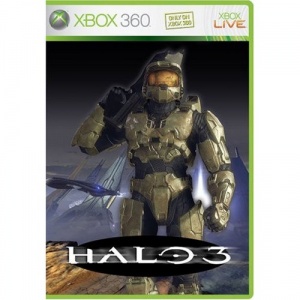 There are two things the makers of Halo 3 should be remorseful about on Launch Day Plus One. The first is the fact that many of those who waited in line for their copies of Halo 3 last night at midnight will have already finished the game at some point today, and I’m not just talking about the folks who have called in sick.

The game is short. Really short. So short that one wonders what all those people in the credits did for three years. Clocking in at around 15 hours (20 if you’re deceiving yourself), Halo 3 ranks right up there with the most embarrassingly short games ever produced. Thankfully there are no endless hallway sections like the library level that artfully extended the length of Halo 2, but I would have appreciated a little more “game” in my $60 multiplayer trainer.

The second shameful thing about Halo 3 is the defective Limited Edition packaging. This one had me shaking my head for hours. Apparently the fancy, double-hinged metal tin containing the limited edition version of Halo 3, complete with mini art book and DVD full of extras, was mated with a chintzy plastic insert that is completely incapable of holding the discs in place. The result: The discs came loose during shipping, rattled around inside the metal case and got all nice and scratched up. 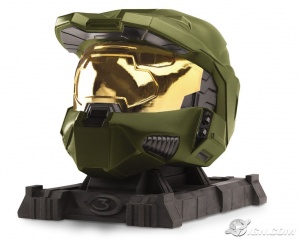 I didn’t believe this when I heard it, but it’s true. It happened to me. Thankfully my copy of the game still plays, but it’s a lousy feeling opening up an expensive limited edition case to discover the equivalent of used discs inside. I’m starting to wonder if there’s anyone at Microsoft who has a fucking clue about how to deliver a quality product the first time around. If I worked at Bungie, and had just spent three years of my life perfecting this game, I’d be pretty damn pissed off that my mighty publisher couldn’t deliver a goddamn disc without scratching it.

And now we pause for breath.

Those quibbles aside, Halo 3 is the game we’ve all been waiting for. It is, in every respect, a worthy next-gen installment of the series. Graphically, the game is as pretty as anything I’ve yet seen on a console. And not “pretty” in that “every single blood droplet is more well-defined than Britney’s abs and yet, other than red, the predominant color is brown” Gears of War way – Halo 3 is actually pretty. Skies are blue, water shimmers in the sunlight and everything has that faint cartoony patina that is the series’ hallmark, juiced up with next-gen lighting and shadow effects. The Halo series has always had a strong design philosophy, and Halo 3 does not disappoint in that respect.

All other elements of the production are equally excellent, from sound to interface. (Halo 3 is one of the first games that really “feels” next-gen in its menu interface.) In thumbing through the game’s menus and taking the occasional moment away from the action to peer across desert vistas gouged by war and yet, in other ways, strangely untouched by the hand of man, it becomes a little more clear where the three years of development time went: the little details.

Whereas Halo 2, in many ways, felt like a bastardization, a mutated genetic experiment performed upon the near perfect console shooter that was Halo 1, Halo 3 feels more like a true evolution in design. The new weapons, vehicles and enemies all work. There are a few tedious moments here and there (taking out that first scarab had me pulling my hair, wishing for a hint book and marveling at the realization I’d never experienced that feeling in Halo before), but on the whole, the game is as tight as a game can possibly be. Gameplay-wise, that is. 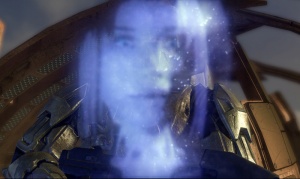 Story-wise, it’s pulp. Pure, uninspired, contrived, hokey sci-fi pulp, which, if you’re fresh off the “BioShock blew my mind, games really are art” boat, will make you want to curl up and die. But let’s not kid ourselves: Halo is the story of a cyborg with a curvaceous hologram inside his head, a race of Predator look-a-likes (and their subjugated alien minorities) and an interstellar zombie horde. Yes, there could, perhaps, be a finely-crafted, leather-bound story hidden within those shallow waters, but anyone truly expecting that entity to emerge fully formed from the head of Halo is probably high.

But let us praise Halo 3, not bury it. The fact is Halo 3 will undoubtedly be called the best multiplayer shooter ever made, and I have no doubt it will soon replace Halo 2 on the all-time “most played” list on Xbox Live. The vehicles are insanely fun to drive, the weapons all feel very weapon-y, and running, gunning and hurling grenades at groups of enemies who die while screaming ridiculous invectives is just as much fun as it was almost a decade ago when the series debuted, and the experience has definitely benefited from Bungie’s growth as a developer.

Sadly, the gameplay refinements come at the cost of excellence in the single-player game. Playing Halo 3‘s solo campaign often feels, in fact, a lot like playing multiplayer. This can be laid at the feet of the AI, which is so incredibly good, it will often make you feel like you’re online getting owned by 12-year-olds and not playing against computer-controlled opponents. The amount of work required to evolve computer AI to this level cannot be underestimated, or underappreciated.

The “helper” AI is also excellent, often clearing entire rooms of enemies before you’ve even fired a shot. This can be good or bad, depending. I found myself allowing (or “allowing”) the friendly soldiers to get wiped out so I could charge in and actually play the game, which again reminds me of multiplayer. If this is the result of all that talk about improving AI in games, then perhaps it may be time to scale that back a little. If I want to get owned by and have my thunder stolen by adolescents with no fire control, I’ll hop online, but I prefer to be the star of the show in my own living room, thank you. 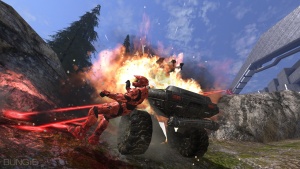 And speaking of fire control, something subtle has changed between the last game and this one: It’s almost impossible to tell if you’ve actually hit what you’re firing at. One of the hallmarks of Halo and Halo 2‘s excellent design was the subtle feedback built into the interface. The aiming reticule turned red when you were in range of an enemy, and telltale flashes or pops signified a hit. In Halo 3 the reticule still changed color (and it’s very pretty), but you kind of have to guess whether you’ve hit or not, or empty an entire weapon’s worth of ammo at a thing until it dies, which is its own kind of fun, to be sure, but less snappy.

But here I go again. In digesting the experience of playing Halo 3 I keep finding myself stuck in a schizophrenic feedback loop, alternating between thinking it’s the greatest game ever made and wishing it were more great.

Halo 3 is Halo through and through, and how much you enjoy it will depend almost entirely on how much you enjoyed Halo 1 and Halo 2. There’s just no middle ground here. If you’re not a Halo fan, if you just don’t “get it,” don’t get it. You’ll feel even more left out in the cold than you already do. 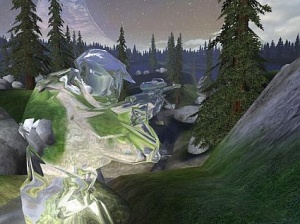 But even if you’re a Halo fan already, if you’re not planning to play online with this game, I can’t recommend buying it. There is some replayability built in, in terms of the fluidity of the combat experience (another Halo hallmark), but I can’t help feeling like I’ve been there and done that. While it’s true I can probably replay the game 10 times over and get a slightly different experience each time (like I did with the first two games, and as evidenced by the few battles I’ve had to replay due to tiredness-induced clumsiness or, shudder, bad level design), Halo 3 isn’t so dramatically different from the first two to make me feel like I’ve really got my hands on something I’ll want to tell my grandkids about.

Case in point, about halfway through, it starts to feel and play a lot like Halo 1. In fact, some levels seem fully ripped from that venerable game. Luckily they’re the best levels, and all of the onscreen action is refined (marines will now stand out of the way when you have to flip the Warthog back over) but it all still feels very familiar – perhaps too familiar.