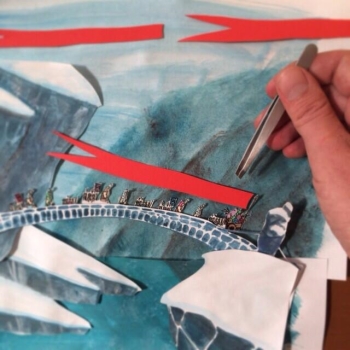 Josh “Thistler” Salmon wanted to show his appreciation for Stoic Studios with a stop motion Vine based on The Banner Saga. Salmon released the short, stop motion film on January 24, Vine’s first birthday, and shared his tribute with the studio on Twitter. The Escapist reached out to Salmon to find out how the gorgeous Vine was made. “I have limited time because of work and kids, so I after I put the 4 year old to bed I would usually spend between 10 pm and 12 pm to work on these,” says Salmon. “I think it took 5 nights to make the art and it was 2 hours to set up the scene and animate it.” The backgrounds and characters in the Vine are hand-painted with gouache on regular printer paper.

In celebration of Vine’s first birthday, the Armstrong Vine Awards competition will award $1,000 per second of video to three Vines, one in each category of Best Art, Best Comedy, and Best Animation. Only Vines released on January 24 are eligible for the prizes. Salmon submitted his Vine for the Best Animation category, but had to move up his plans to animate the short in order to release it in time for the competition. “I knew I could maybe get [The Banner Saga vine] completed in time,” says Salmon. “I broke into a cold sweat, put the coffee on and animated as quickly as I could. Very slowly. With tweezers.”

Salmon has been using Vine since January 2013. “As soon as I’d made my first Vine I realised I could animate with it and from then on the majority of my vines were stop motion,” says Salmon. “It’s great to have a short finished piece at the end of the night.” Salmon has an on-going series of stop motion vines titled The Curious Mirror, which follows the unsettling adventures of a boy who steps through a mirror. The art in The Curious Mirror is pen and gouache, with a children’s keyboard and Salmon’s own whistles and hums providing the music. In addition to making these beautiful Vines , Salmon is a game developer. Salmon released Bubble Jets for iOS last year, a physics puzzle game made initially for his son. Salmon is currently working on another children’s iOS game, The Whale Game, a game about a whale defending his beach ball against those who would do it harm, and which will feature the music of James Flamestar. The art of The Whale Game is made of plasticine. Check out the gallery for some behind the scenes photos that Salmon shared with The Escapist.

Stoic Studios released The Banner Saga on January 14 for PC and Mac. The studio, founded by former Bioware staffers, raised funds for the tactical RPG with a successful Kickstarter campaign in 2012.