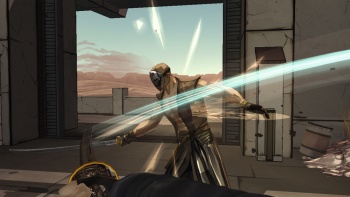 We go hands on with Red Steel 2 to find out if Ubisoft’s Motion-Plus-powered sequel rights the wrongs of its disappointing predecessor.

Sometimes the simplest ideas are the hardest ones to get right. Katanas, guns and motion control. That should basically add up to fun on the Wii, but most of us who took the plunge on Red Steel came away more than a tad disappointed. Now Ubisoft is looking to make the game they intended to from the beginning with Red Steel 2, and with the help of a little doodad called the Wii Motion Plus, they’re declaring victory over the fiercest of enemies to fun on Nintendo’s console.

“We think we’ve defeated the waggle,” creative director Jason Vandenberghe exclaims. “[Motion Plus] really has made this game possible.”

When it comes to gameplay, Red Steel 2 follows the same basic premise as its predecessor: you have a sword to slash, you have a gun to shoot, and you slash and shoot people with them. But when Red Steel 2 asks you to make a wide horizontal slash and to do it with genuine strength, you really can’t just wiggle the Wii Remote, you have to give it a good swipe and angle it well. It’s pretty astounding how well the game registers your oomph – I kept taking forever to kill enemies until someone called out “YOU CAN’T WAGGLE” and I really gave the Wiimote a Duncan MacLeod swing, which sliced off my enemy’s armor in a single swipe.

Motion Plus isn’t just brute force all about either, it’s also adept at recognizing finesse. When it came time to block with the sword (you need to hold the sword horizontally or vertically to block specific attacks), I held A and sort of twirled the Wii Remote around like a fencer – my movements were replicated pretty accurately, not exactly 1:1 control but close enough, maybe .85 : 1, if you want me to be precise. There might have been a margin of error here thanks to there being 3 other active Wii Remotes in the room, though.

Controls are otherwise pretty straightforward: Movement is handled with your nunchuk, while sword and gunplay are on the Wiimote. One difference in Red Steel 2 is you can switch between your gun and sword at will – just press B trigger to fire whenever you want. Gunplay wasn’t nearly as much fun as the sword stuff – mostly because Red Steel 2‘s enemies have bulletproof skulls. It definitely feels good and is more precise than most Wii shooting I’ve come across, but Vandenberghe calls the game “a sword game with guns” or a “first-person brawler,” so yeah, shooting is definitely secondary in some sense.

Where the game seems to still struggle is how it structures all that combat. I couldn’t shake the feeling that, as satisfying as the controls were, the game still doesn’t really feel like the game really needs Motion Plus – it’s fantastic that slashing feels so accurate, but killing enemies still seemed to be a straightforward hit, hit, block, hit, block, hit type of affair, no matter how dressed up the swordplay was.

Though Ubisoft says that Red Steel 2 has a slightly non-linear structure which finds you (playing as the last of a samurai/gunslinger clan out for vengeance in a neat hybrid of spaghetti westerns and samurai movies) traveling freely between a hub town and adjacent areas doing quests and missions, I only played a single level, which had me walking through an empty town shooting and slashing my way through doors in between “arena-style” battles where mobs of four or five guys would attack.

The problem here was the lock-on system, which seems to always auto-target the nearest enemy (you can switch with Z). In a first-person game I want to be able to turn and look with freedom, or else I feel penned in – I understand you can work around the auto-targeting, which is there to help, but I just felt like it wasn’t really doing me much good when I had more than two enemies to take on, because half the time I’d get auto-targeted onto the person other than the one I wanted to slice and dice.

Still, I can’t deny that so far, Red Steel 2 gets the key things right: the controls are tight, responsive, and feel genuinely novel, and the combat, despite the annoying targeting system, is satisfying and fun, if a bit shallow. There’s plenty I didn’t see – you unlock combos and special powers (like the ability to lift enemies in the air and then juggle them) and the boss fight, which was against a monstrous foe with a giant hammer and (literally) giant X on his back, left me hoping for some intense 1v1 Bushido Blade-esque duels.

Credit given where credit is due: I think Ubisoft can safely say they’ve defeated the waggle with Red Steel 2. If they can defeat the myriad other issues with this game, they’ll have a real winner on their hands, maybe something far better than what Red Steel should have been in the first place.