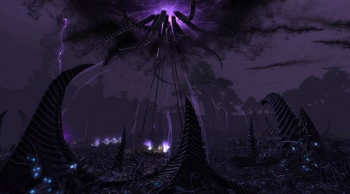 You don't want to wake up to this outside your window.

When I first saw Rift: Planes of Telara at its formal unveiling back in April, it was obvious that the developer wasn’t trying to reinvent the modern MMOG. The core of Rift seemed to be tried-and-true MMORPG fare, from the UI to the hotkey setup to the classes themselves – it looked like a game that MMOG veterans could jump right into and feel at home.

After playing it for a few hours last week, I can say that my initial observations were right on the money. It’s immediately accessible for anyone who has spent a good amount of time in World of Warcraft or any other modern MMOG. I didn’t know a thing about the Nightblade character I created – one of Rift‘s Rogue subclasses – but found it easy to grok the concept right away.

You’re a Rogue who specializes in throwing weapons; you wear somewhat-squishy armor but make up for it with a high chance to dodge, you have a constantly regenerating resource that you use to activate your abilities, and using special moves on a target racks up combo points that you use to power stronger finishing attacks. In fact, it’s not inaccurate to say that anyone who has ever played a WoW Rogue will find the basic concept almost identical (though with a few more ranged abilities).

In Rift, you start off dead. Now, that’s not as much of a hindrance as you might imagine. You are the soul of a fallen hero (or villain) told to make your way back to the realm of the living to join in a battle for the fate of the world – if nothing else, it’s certainly a more unique starting concept than most MMOGs. You begin your semi-dead kind of life in the Shadowlands, a world between life and death, and must fight your way back to Telara.

Naturally, it isn’t easy: Not only does the Shadowlands have its share of local semi-dead wildlife, but it also has all of the other souls of heroes just like you who couldn’t make it to the other side and who have become corrupted. In other words, the quicker you make it out, the better. As with all of the core gameplay, Rift starts out very familiar: Kill these monsters, bring me these items, click on these shiny things.

In all fairness, the quests in Rift do feel more exploratory and less grindy than the norm, meaning that you’ll get a nice feel for the lay of the land in the ghostly Shadowlands on your journey back to life. There’s also a nice touch in that you learn skills automatically upon spending the requisite number of skill tree points that you get when you level up – you still need to visit trainers purchase higher ranks of skills you’ve already obtained, but it keeps you in the field when you’re adventuring rather than breaking up the experience by sending you back to town every time you ding. 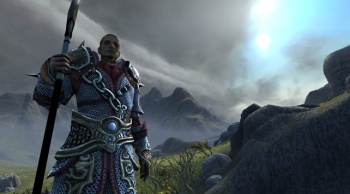 Rift's world is subtly stunning if you have the rig for it.

I was happily questing my way through the Shadowlands, finding everything quite comfortably familiar, when I saw it in the distance – a little glowing spark in the otherwise dark world around me. It distorted the very air around it (with some remarkably cool visual effects), shining like a little beacon. It was a tear in reality, a potential opening to one of the six elemental planes that converge on Telara – Life, Death, Fire, Water, Earth and Air. If left unchecked, it would grow into a fully-fledged Rift (hey, title drop!) that would open the way for an elemental invasion.

Naturally, we don’t want that to happen. Players have the ability to forcibly open a Rift (as one of the developers put it, “You’re insulting the plane’s mother,”) in order to preemptively draw the creatures from the other plane into this reality – to put a stop to the invasion by beating them up and taking their lunch. The opening of a Rift is really, really cool: It flares up and the entire world around it begins to mutate. While the Plane of Life (as seen in the Preview) results in the area becoming wildly overgrown, this was a Rift to the Plane of Death, and instead everything began to wither and die.

The actual closing of the Rifts is fairly simple – kill the monsters that pop out, kill the bigger monsters, and then kill the boss monster. Boom, Rift closed. What’s cool about it is that it functions very much like the Public Quests in Warhammer or Champions Online – anyone can jump in and help contribute, and they’ll get a reward at the end proportional to their contributions.

As I adventured further, eventually escaping from the Shadowlands to the mercifully less-dreary fertile coastal farmland of Telara (whoops, guess some of the corrupted hero souls used that portal to come along for the ride) it was the Rifts that started to draw me in. The tears and Rifts add a surprisingly compelling and dynamic new element to what is otherwise a fairly standard MMORPG – planar tears appear on the map as they randomly pop up, meaning that it’s possible to forego questing entirely and instead just level up by hunting Rifts (and getting some rather useful items in the process).

Of course, closing a Rift is only one thing you can do with it – and sometimes, it gets more interesting if they stay open for too long. What happens then? Well, I can’t talk about it now, but check back later, because it’s actually pretty cool.

As it stands, Rift: Planes of Telara is looking like a very standard and familiar MMORPG with one hell of a fresh twist. Maybe that’s just what some people are looking for, you know?

For more on Rift, check out our initial preview.

Blockbuster Muscles In On GameFly’s Territory