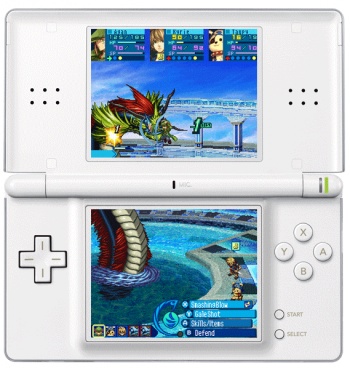 Sands of Destruction could be the Nintendo DS RPG too look out for in 2010.

Being the RPG fan that I am, a big surprise for me at GameX this year was the opportunity to play Sands of Destruction. Tucked in the corner of Sega’s booth were a couple of Nintendo DS systems showing off the Imageepoch developed RPG, which was a nice treat. Sands of Destruction has been on my radar since it was in development for release in Japan under the name World Destruction. The game has taken some time to make the trek to North America, having hit Japanese stores over a year ago, but is now set for release in early 2010.

The game’s original Japanese title gives you an idea of a major plot element. The human population in Sands has been completely enslaved by an anthropomorphic feral race. As is par for the course, a rebel organization has formed to take down the ferals, but not in a way typically seen in the past. Calling themselves the World Annihilation Front, this rebel human group wants to completely destroy the world rather than to liberate it. This might be taking things a little too far, but makes for a stimulating premise nonetheless.

Sands of Destruction focuses on Kyrie, a male character that mysteriously has the power to destroy the world. How’s that for a coincidence? Kyrie receives the attention of the World Annihilation Front for this reason, and becomes involved with the fate of what is to be. At the start of the game though, he’s still just a dude out to collect some mushrooms, as he was when I got a chance to control him.

These mushrooms don’t come easy, residing in a dangerous cave that is located right by the edge of Kyrie’s hometown, so collecting them gave me a chance to get the hang of the game’s controls and its battle system. Why the townspeople haven’t cleared the cave out of monsters already considering its close proximity to their children, I can’t say, but I was happy to traverse it to get my kill on. Sands‘ environments look pretty good, and I’m happy to see that Imageepoch chose to use 2D sprites for the character models rather than the super-deformed 3D models that are typical with DS RPGs. The environments are still in 3D, and the camera can be rotated to all angles. A map displayed on the DS’s other screen, even while in dungeons, also makes exploration easier.

Battles move quickly, which is important for a Japanese style RPG as there are likely to be a lot of them. Sands‘ random encounters use a turn-based combat system, though it is somewhat action oriented. Each character can perform a certain amount of actions per turn, and can rack up combos in this way by using multiple kinds of attacks. Kyrie was able to use a powerful attack by pressing X, or an attack that seemed weaker but would hit two times by pressing Y. He also had the ability to use blood skills, those that harm enemies, and life skills, those that heal or help friendly characters. Upon using certain attacks, Kyrie would cause a status effect on an enemy or gain a chance to perform an extra action. These attacks can also be customized, increasing their power or accuracy, by using customization points gained after each battle. Quips, vocal exclamations that provide bonuses, add even further depth to Sands of Destruction‘s battle system, though I cannot speak on their merits first-hand as I did not get a chance to experience their effects.

Battles are two-screen affairs, with flying enemies sometimes located on the upper screen, and ground-based enemies on the lower screen. This apparently plays into battle somehow later, though it didn’t have a major effect other than graphically during my playtime. I expected the first boss, a sandworm, to extend to the upper screen at one point, but I either defeated him too quickly or two-screen bosses don’t come until later. After defeating it, I collected my mushrooms, made my way out of the cave, and my playtime was over.

Sadly, I did not get a chance to meet Sands of Destruction‘s pirate bear character, but that will just give me something to look forward to when I pickup the game once it is released. Even after a short time playing, I can tell that Sands is a serious game to keep an eye on for RPG fans. Battles are quick and easy, but with enough possible depth and customization to remain interesting. The graphics also look good enough, and the game’s story could go to some interesting places. For those interested, Sands‘ soundtrack was composed by Yasunori Mitsuda, who worked on Chrono Trigger, Chrono Cross, and Xenogears, to name a few. Though I doubt that Sands of Destruction‘s ending will show a cutscene of the world exploding, I am intrigued to see if that is a possibility.