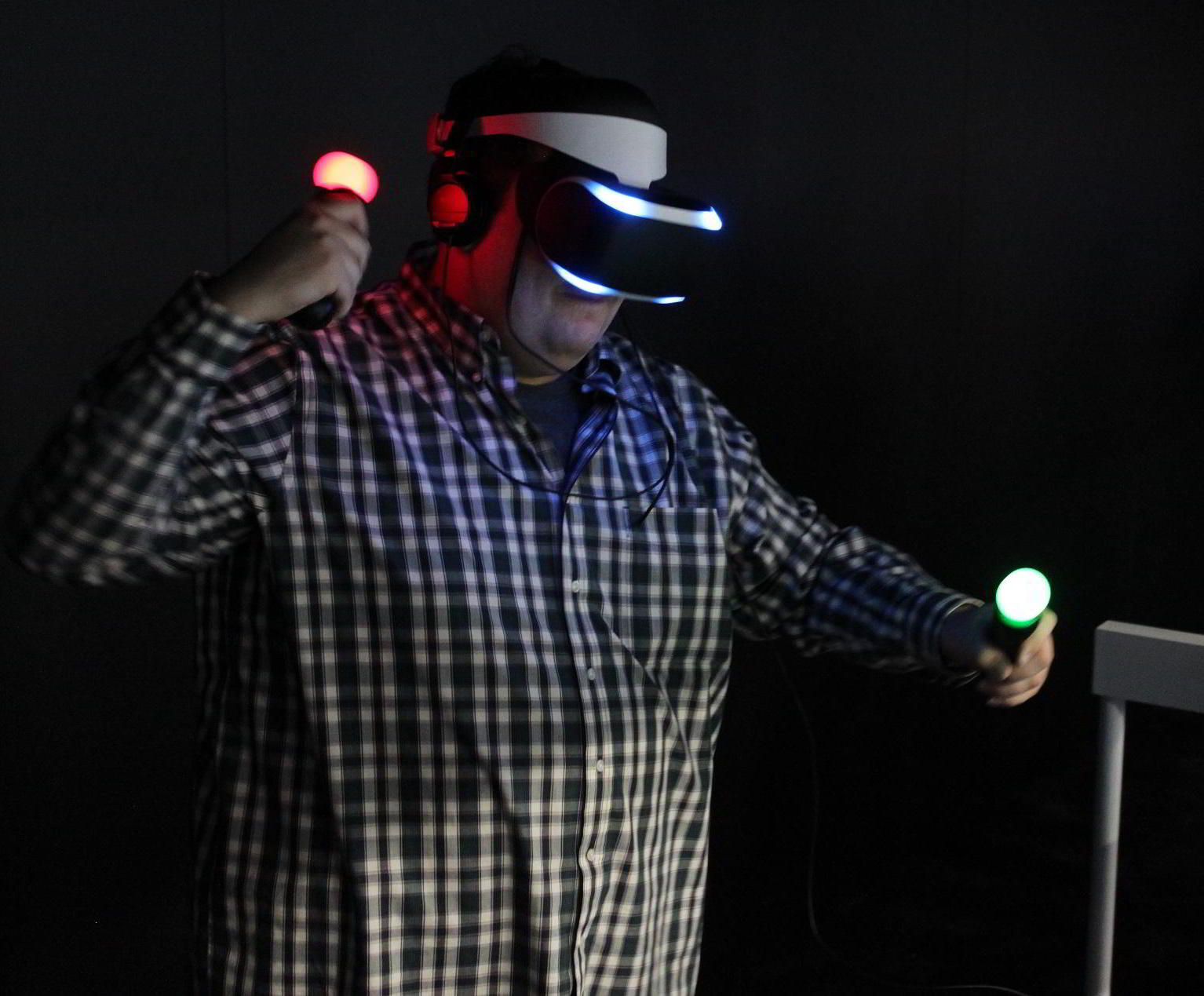 VR is one of the bigger themes at GDC 2014, and Sony is officially in the thick of the virtual reality movement. Its new Project Morpheus VR prototype was available for the show-going public to demo today, and I got to go head-on with the PS4 VR hardware.

The first thing you’ll notice about Project Morpheus is the styling, as the headset looks pretty polished for an early public prototype. The white on black, flanked by the color tracking strips, gives the appearance of a retail-ready device.

Comfort and stability might be sacrificed to some extent with Project Morpheus’ design. It looks very futuristic, but the click-in band that wraps around your head touches down at an odd angle, and a “falling off” sensation was pervasive throughout the demo. I think most of this can be attributed to the radically different design when compared to the Oculus VR hardware — especially since Project Morpheus never fell out of place — so it’s a sensation you simply need to adjust to.

Once Project Morpheus is in place, the demos begin. Sony was showing off two internally made demos, the first of which was Deep Dive. Like Hooper in Jaws before you, in the steel cage you go, down to the watery depths. It’s really just a motion preparation demo — looking around the water, firing a flare gun into schools of smaller fish, and eventually being freaked the hell out by a giant Great White.

The second demo was substantially more interactive, as it let you take your GDC frustration out on a fighting dummy with gauntlets, swords, and a crossbow. All in all, a solid way to demo what Project Morpheus is capable of.

The hardware shows the effort that Sony has put in over the last few years, although I think it’s a small step behind where Oculus is currently, especially with the release of the second Developer Kit. There’s a small amount of motion blur, but it’s not as bad as say, the first Oculus HD prototype. I expect it to be gone on whatever prototype Sony has going six or so months from now.

The PS Move integration is both Project Morpheus’ biggest advantage, and most serious weakness. The hand and head tracking work well enough most of the time, especially if you bring your hand/weapon in for a closer look. There were plenty of glitch moments throughout, however, showing that the Move tracking system still needs some serious work. During the crossbow component of the Knight demo, my left hand would fly off into oblivion if I tried to use it to steady my right hand. And in the Deep Dive demo, turning your head 180 degrees around would reveal the headless model of your diver body. It all screams “prototype,” but the entire experience was wholly better than I expected it to be.

While I think framing VR as “Project Morpheus versus Oculus VR” is a mistake, of course we have to compare the hardware. If you scaled the Oculus Dev Kit 2 hardware to 10/10, the Sony prototype is at about an 8.5 or 9.0. Sony’s biggest advantage in this case is its size; where Oculus had to form relationships with manufacturers and scramble for custom hardware, Sony controls all the hardware and R&D resources it could possibly need for the Project Morpheus project. Catching up to Oculus shouldn’t be an issue, and I expect the next iteration of Project Morpheus to be a great leap forward.