Developed by CreativeForge Games and published by Gambitious Digital. Releasing on November 18, 2015. Available on PC. Review code/copy provided by publisher.

In media, The West is a trackless landscape where families struggle to make their way in life while beset by bandits and other opportunists. Although there are armed sheriffs protecting islands of stability cut off from civilization back east, enough men and guns can overthrow just about any town. On this frontier, good men are only as good their gunslinging allows them to be, and great men are often shot down trying to maintain order. Hard West brings turn-based tactics to this setting, with a challenging style and dangerous mechanics requiring clever forethought, tactical acumen, and more than a little luck to survive. It’s also part of that supernaturally-tinged subgenre – the Weird Western – that tends to bring in a little of the steampunk and horror genres alongside more historical conflicts. 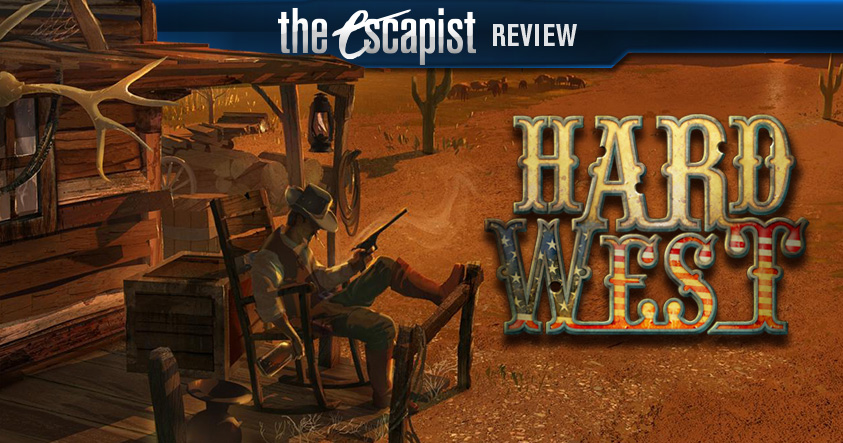 Hard West starts with two good men in tough times, fresh off the Oregon trail, making what life for themselves they can in the lawless West. Mid-journey, a mother is kidnapped, and the father, his name unknown, sets out to save his spouse however he can. This encounter is the tutorial, introducing the players to the game’s combat systems. The father creeps along the edges of wells, fences, and cellars on his way into the kidnappers’ hideout. After slaying the men who took his wife, he finds her slain as well. Without his spouse, or much in the way of provisions, the man and his son Warren settle down, hoping to strike enough luck and gold to get back on the Oregon trail – and back toward a better future.

Tragedy follows the characters in Hard West, and no matter the player’s efforts within the various campaigns, Warren, his father, and a young woman named Florence never seem to find much luck. Life is bitterly difficult. Every sunrise brings some new strife. Taken as a whole, it’s a sobering experience, one where comfort feels fleeting and good luck lasts just long enough to keep hope alive.

In motion, Hard West‘s best work is done in atmosphere and style. The entire game overflows with aesthetic design. The music is high adrenaline with a modern pulse and a pulpy feel that would be right at home in a Western film. The game is dark in the shadows, bright in the desert sun, and although combat feels relatively simple, there’s a lot of nuance buried in the joints of the game’s interlocking systems. The atmosphere is near-perfect, and with it, there’s a constant sensation of feeling right at home amidst the dust and six shooters. Later, as demons and devilish men emerge from the dusty roads and start to bargain for the characters’ souls, the game still keeps everything very grounded. The demons players fight are dangerous, with more health and scarier weapons, but deal death no more exotic than a bandit’s bullet.

Although the game makes no bones about its difficulty, it never feels like a grind, striking a fair balance between hard strategy and the dose of luck needed to survive even a well-planned, well-armed, well-executed gunfight. Characters have two significant meters in combat: A luck meter that determines the likelihood that the next shot will miss, and a health meter, which staves off the cold embrace of death as long as it has at least a single tick left. When characters get hit, they regain a bit of luck and can afford to take risks again. Cover is key, as it both reduces the luck a character loses from getting shot at and reduces the damage taken when they get hit – capping it at 1 or 2 HP depending on the weapon Since most characters sit between 6 and 8 health, the cover system keeps them alive. Being caught out of cover, or at a bad angle, spells death.

The luck meter also powers your special abilities: Activating any character skill expends a certain amount of luck. These skills are amazingly powerful, such as Golden Bullet, which allows the player to fire a shot with 100% accuracy into any enemy on the field, obstructions be damned, but costs 80% of most characters’ full luck cache – meaning the character is almost guaranteed to catch a bullet in short order.

Because of the luck dynamic, combat is always a bit more about strategy than equipment. Players will always flirt with the unknown as they try to balance how many angles their characters are covered from against flanking their enemies – after all, getting the drop on opponents often means you kill them in one bullet rather than six.. Better guns increase the ammo count and range at which a character can shoot, amulets give them access to a larger cache of luck or accuracy, and healing items can make the battlefield just a little less risky, but fights always come back to positioning and clever skill use. Everything else, though beneficial, is secondary.

In addition to these these skills, characters have passive bonuses like absolute stealth in the shadow of buildings, health regeneration from cannibalizing fallen enemies, and looting rare guns from fallen enemies. These skills are built into playing cards found after story beats and gunfights in each campaign. Each character can hold up to five cards, and in addition to cards’ passive and active skills, there are also passive stat boosts for completing poker hands with that character’s cards.

Despite there being no shortage of the supernatural in the West, death cannot be reversed. If any plot character falls in combat, the campaign ends right there, forcing the player to restart that story. The game mitigates frustration by having three difficulty modes, including the option to unselect Ironman Mode, where the death of plot essential characters force the campaign to restart from the beginning, and even a lasting damage mode, which awards bonuses, called “scars,” to characters who survive critical injuries.

Outside of combat, the game is broken down into multiple one to two hour campaigns that each tell a small section of the game’s story. They have distinct settings and tones, simply three different paths through the West. Each of these campaigns introduces wildly varying systems for the player to navigate outside of combat: gold prospecting, a day-night system with party hunger, or a psychological geiger counter that keeps track of ambient insanity.

Because of the huge shifts in structure, and since everything resets between campaigns, Hard West never quite feels as cohesive outside of combat as in it. The tonal changes force you to learn new systems for an hour of play, then discard them for a different system afterward. Combat feels the same between campaigns, but narrative doesn’t, so campaigns never settle in long enough to become familiar and nuanced. Further, equipment resets from campaign to campaign, so progress feels like it comes in jolts in starts.

Along with the structural shakeups are story beats that feel like they drag the player toward a foregone conclusion. Much of what happens within a campaign comes from play decisions, but there are moments where decisions are made for the player. In one campaign, the player is offered a deal by the devil shortly before an unwinnable battle. After that battle is lost, the player is forced into the deal, regardless of what success the player finds before dying. Given the subtle supernatural through most of the game, these moments feel jarring, stepping in and poaching the player’s freedom to choose.

Despite occasional quirks in storytelling, and supernatural elements that can feel out of place, Hard West accomplishes quite a bit with what it has. The film grain story beats and smooth-voiced narrator do a great deal to make the harsh West a very endearing setting, and the excellent combat system makes play a joy. Although the Weird West never feels easy, it still feels a bit like home – comforting despite the shortcomings.

Bottom Line: With a little bit more cohesion and fewer drastic system changes over the course of the campaigns, Hard West could have been amazing. Instead, it’s merely quite good.

Recommendation: An excellent example of what makes the turn-based strategy genre fantastic, and a no-brainer for XCOM fans. Players looking for a 20+ hour investment might want to turn to more RPG-inspired experiences instead.