Here’s a question that almost no one in the business of asking such questions is asking now, but I think they ought to be: Should Harry Potter & The Deathly Hallows: Part II receive an Academy Award nomination for Best Picture?

One recognizes that it sounds just a little bit strange on its face – none of the Potter movies have been previously seen as Oscar contenders for anything other than the technical categories, and even then they’ve often been outshined by the showier films that rivaled them each year. In addition, they’re broadly characterized as family films first-and-foremost – a genre seldom taken seriously come awards time unless the name “Pixar” is attached. As it went on, the series became less and less about making solid stand-alone films and more about staging a bigger picture miniseries with the budget and audience to deserve a theatrical showing. To be blunt, I’d be hard pressed to count any of the individual Potter installments among the very best films of their respective years, and while I enjoyed the final installment well enough I doubt it will stack up any differently come January.

But is that really all that matters?

Objectively, industry award shows are supposed to reward and showcase the best of a given year or scenario, but everyone knows that’s rarely how it works out. Taste is subjective, after all, and films have won and lost based on being popular, being innovative, “the national mood,” and even in response to other films. It’s widely believed, for example, that Titanic conquered The Oscars in 1997 in part owing to a pendulum swing backlash against the indie-dominated previous year when The English Patient took the prize, and that Shakespeare in Love infamously bested Saving Private Ryan the following year for a reversal of the same logic. More recently, it’s an open secret that the recent moves to widen the pool of Best Picture nominees was a direct response to cultural outrage at the “snubbing” of The Dark Knight.

The Oscars themselves, after all, were originally conceived as a publicity machine with the “fig leaf” of broadcasting the Academy Awards gala as a televised event allowing Hollywood to turn around mounting public scrutiny of pre-WWII celebrity scandals by reminding everyone of the biggest movies and most glamorous stars all at once. First and foremost, it’s a show about and industry honoring its own most important contributors. As such, I don’t know that it can be reasonably argued that the Harry Potter series is not one of the most important – to say nothing of impressive – productions to have ever happened in modern Hollywood.

It’s easy to forget, after all, just how much of an enormous undertaking Harry Potter has been. Particularly since its baby steps were so consistently eclipsed – at the movies by the more impressively realized Lord of The Rings trilogy and in the wider culture by J.K. Rowling’s original books, to which the films are (often unfairly) seen as mere abbreviated counterparts.

It’s also been a victim of its own business model’s success. A decade later, spreading a single narrative with largely the same cast and production feel over eight films remains impressive, but hardly epic compared to wilder sounding experiments like Marvel Studios’ attempt to weave their buckets of separate films, genres and sequels into a single unified continuity. And what’s supposed to be so impressive about translating a book – which already has a whole story set up for you – to the screen when other productions are tasked with hammering out workable narratives from toy lines and arcade games? 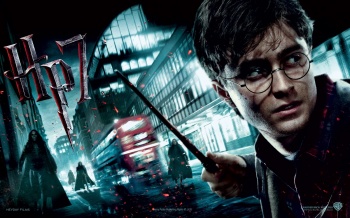 But looking back on it with clear eyes, the sheer magnitude of Potter’s production is something approaching a Hollywood miracle and an example of a unprecedented creative risk. The phenomenon of the books was at an all-time high when the first film was greenlit, but it was very uncertain that they’d remain popular or even remain good – Rowling hadn’t even finished half of the series by that point!

The entire main cast would be young children, difficult enough to cast well on their own, but these children would have to show enough early talent to still work as they aged alongside their characters. If you’d proposed such a hugely unpredictable long-term risk to the likes of Louis B. Mayer, you’d be lucky to leave his office alive. And what about the kids themselves – and their parents? What would you say if, with your age still in the single digits, you were asked to commit the next decade of your life to a single job of make believe?

Committing to make Harry Potter meant that the studio, the producers, the actors, the investors – everyone – had to sign up for a hugely time consuming (hell, life consuming!) expedition with a half-completed map and an extraordinarily unclear goal. There had never, ever been a production like this is the entire century-plus history of filmmaking, and that I can’t in good conscience follow that statement up with the expected “and there never will be again” is the ultimate testament to the final impossible fact of the whole story:

An entire story of a fictional character’s life – and the lives of his friends, family, associates and enemies – told from childhood to young adulthood. With the same (save for one actor’s unfortunate passing) massive cast, in the same sprawling fictional world, spread across a dizzying number of locations and individual events in eight films over a period of nearly ten years. The makers of Harry Potter did nothing less than conjure an entire world, populate it with living beings and then film the unfolding results over a decade. The characters and their world have grown, aged and even died with unbroken linearity in front of a billion fans worldwide.

Even if you don’t particularly care for this story or these characters, the scale of the project and the degree to which it has been a success versus the millions of ways it could’ve failed along the way cannot be denied. In terms of big budget franchise filmmaking, this is the circumnavigation of the globe. This is Edison and the light bulb. This is the Wright Brothers taking off.

If that doesn’t scream Best Picture nomination, I don’t know what does, except that it’s almost a given that as a standalone feature, Deathly Hallows almost certainly won’t end up as the best film of 2011. And while it’s not unheard of for actors to receive nominations and awards suspected more to honor a “lifetime” of work rather than the role they’re technically listed for, it doesn’t happen often for features. 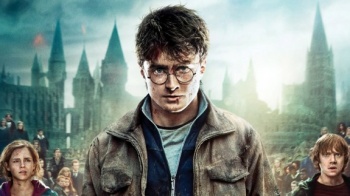 On the basis of “how the business works,” I would be very surprised in Hallows doesn’t wind up with a Best Picture nomination. The expanded roster space, recently amended form “ten” to “however many qualify,” was designed to make such things happen. And even if not, it’s a safe bet that a big part of the 2011 Oscar telecast will be given over to any excuse that can be found to cue up John Williams’ iconic main theme, run the memorable clips and trot the now-set-for-life actors out onto the stage. Nominations or not, if you don’t see some combination of Daniel Radcliffe, Rupert Grint and Emma Watson taking their hopefully-not-final bows – flanked by enormous blowups of their baby pictures from Sorcerer’s Stone – to a standing ovation at this year’s show, someone on The Academy’s TV production team is supremely bad at their job.

Also, it must be said – Hollywood as a whole loves this franchise. This isn’t like Dark Knight or even LOTR – both of which were seen in some big circles as niche properties strictly for fanboys and hardcore geeks – everyone loved (or at least liked) Harry Potter. The books were just as widely devoured by adults as they were by kids, and ten years is an eternity in the entertainment business. There’s a lot of twenty-something Academy voters who (literally) grew up with the series, and older voters with kids/grandkids/nephews/nieces/etc. tend to be equally enamored, to say nothing of the affection the all-power Actor’s Bloc has for the who’s who of British stage legends who rounded out the adult cast. If Harry winds up with a Best Picture nomination, I can’t think of a good reason why it wouldn’t be an easy frontrunner.

There’s also the precedent of a so-called “Special” Oscar, i.e., one-off awards that are given for monumental achievements that change the business, technology or culture of filmmaking. Most famously, eight such Oscars were awarded to Walt Disney in 1938 for pulling off the previously unthinkable success of feature length animation with Snow White – he was given one full-sized Oscar and seven smaller ones. While today it might be seen (justifiably) as a somewhat cynical maneuver – “you won’t win, so here’s an honorary award so you’ll show up and bring your massive audience with you” – I could see something similarly being given to Potter’s producers. Though, really, if anyone should get it, it’s whatever casting director was able to correctly predict that Radcliffe etc. would still be right for their parts a decade into the future. (Legend has it that, when producers were first shown Emma Watson’s screen test, it was only half-jokingly asked whether or not they could put her under contract “until she’s 40.”)

I’m putting my – admittedly spotty – Oscar prediction cards on the table with this one: The production of Harry Potter is the Hollywood story of the decade, and it deserves some measure of serious recognition for that. And I have a gut feeling that, whether by nomination, victory or even omission, it’ll be the story of this year’s Oscars, too.