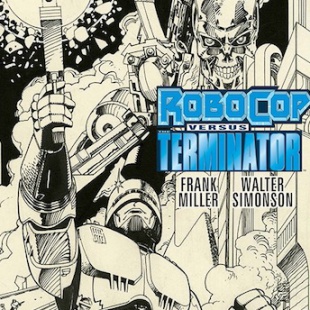 It’s so good it makes me temporarily forget how much I dislike Robocop Vs. The Terminator.

As announced earlier this year, in celebration of the miniseries’ 22nd anniversary (though, for some reason it’s being billed as the 20th), Dark Horse Comics is releasing two graphic novel reprintings of Robocop Vs. The Terminator, the Frank Miller/Walter Simonson collab creation from 1992 which pitted cyborg cop Alex Murphy against the entirety of humanity’s future robotic oppressors. Next month, you’ll be able to buy a hardcover, full-color trade collection, and a gallery edition with the art in full size that is positively gorgeous.

In advance of the July release, the publisher has made some preview images available to drool over. You can click the gallery below for a glimpse of the Gallery Edition cover and a page from the hardcover graphic novel. You can also see more of the Gallery edition over on Bleeding Cool.

For those of you who don’t remember this series, note that if you’re a fan of crossovers that make increasingly less sense the further we get from the era when everyone freaked out about the Alien skull in the trophy gallery in Predator 2, then this is right up your alley. The story reveals that the tech used to rebuild Murphy into Robocop was eventually repurposed for the creation of Skynet. Which of course makes Robocop the Donkey Kong to Skynet’s Wii U. It starts as the human resistance sends an assassin back in time to pre-apocalypse detroit to eliminate him, while Skynet sends terminators back to protect him. This clues Murphy into the horrible fate awaiting him and the human race, which in the future allows his disembodied brain, now hidden inside Skynet’s operating system, to undermine the robot overlords from the inside.

It had one too many grandfather paradox violations for my taste, but it did include some amusing concepts Miller originally intended to include in his scripts for Robocop 2 and 3, plus a cool moment with a large number of Skynet-manufactured Robocop-Terminators fighting alongside the human resistance. Also, Walt Simonson’s art is fairly exceptional, especially for the early 90s, and it’s always nice to be reminded of a time before Frank Miller fell down the rabbit hole.

So what do you think, readers? I’m personally not a fan of the practically ubiquitous franchise crossovers from the 90s, but I can’t deny the idea of Robocop fighting Terminators is kind of cool.