Looking for strategies to take down the second wing of Naxxramas? Here’s our budget guide to all three bosses.

Last week, Naxxramas launched with The Arachnid Quarter, and we published a budget guide, and not-so-budget Heroic guide to help you through. This week is The Plague Quarter, and we’ll be doing the same thing, starting with an incredibly budget friendly Normal guide, right here! 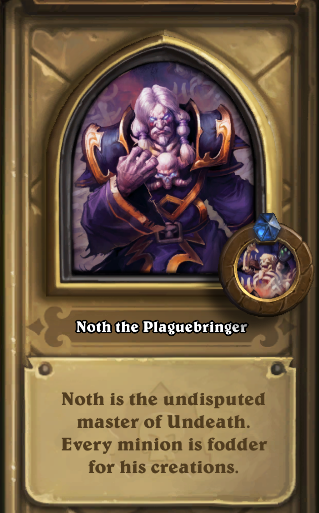 Noth has the first passive Hero ability we’ve seen thus far, which summons a 1/1 Skeleton each time one of your minions dies. It’s not that powerful, as long as you’re building with that in mind, since you can focus on hard-to-kill minions to prevent it from triggering. Noth’s deck consists largely of Naxxramas-specific cards, with a handful of Mage Secrets, like Ice Block, Counterspell, and the new Duplicate. Additionally, Noth wields one Warlock spell, Mortal Coil.

Mad Scientist is definitely an early play to look out for, as the Deathrattle puts a Secret from Noth’s deck directly into play. Likewise, Undertaker is an efficient one-drop, which buffs every time a Deathrattle minion is played, and rest assured, there will be plenty of them. Weapons aren’t necessarily the best go-to for damage here, since Noth also plays Skeletal Smith, whose Deathrattle destroys your weapon, but it’s fairly easy to play around, and you can always just avoid killing it while you have a weapon equipped.

The build here is designed around using as many core cards as possible in order to keep the cost low, while taking advantage of Warsong Commander. With most of our minions triggering the Commander’s ability, you’ll be able to rush Noth down fairly easily, while largely ignoring the minions he plays. Comboing Warsong Commander with Raging Worgen and Inner Rage, you’ve got 12 damage to the face, which serves as a great finisher. Try to keep a weapon active and keep your armor up. Focus on taking out Noth’s minions with your weapon while going to the face with minions, and you should have no problem taking him down. 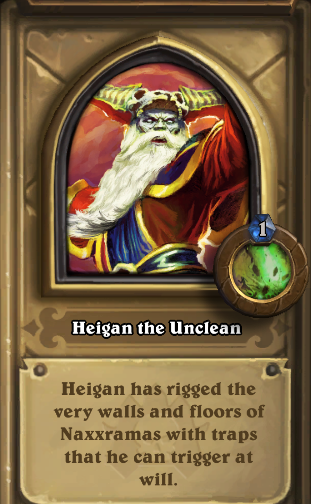 Heigan’s ability once again precludes a rush deck, since almost every rush minion will die to the two damage. Instead, we’ll focus on weapons, direct damage spells, and minions that don’t die to the ability, or leave a minion behind when they do die. Heigan’s deck is heavily Demon focused, with all your favorite Warlock minions making an appearance. Additionally, Heigan wields the new Voidcaller, which puts a random Demon from your hand onto the battlefield when it dies. Bane of Doom doesn’t seem to be utilized very effectively by the AI, but is definitely something to watch out for. Finally, the new Mindpocalypse is a reasonably fair spell that you’ll probably appreciate him casting, as drawing cards and gaining Mana Crystals is usually something you want to be doing.

To take on Heigan, I thought that a creature-light deck would minimize the impact of his ability, and some cheap-ish AOE was imperative to deal with the Blood Imps. I opted to go Rogue here, as Fan of Knives is effective early game AOE, and the Rogue Hero Ability lets you focus on weapons, rather than minions for your damage. Running a Rogue also had the added benefit of Sap, which returns a minion to its owner’s hand, and is particularly effective against many Demons with painful Battlecry abilities. Living the dream is watching Heigan play a Felguard – an undercosted Taunt guy that destroys a Mana Crystal when summoned – while you have a Sap or two in hand. Forcing him to recast repeatedly is incredibly powerful at keeping him off higher-cost spells and minions.

While your focus will be on weapon damage, you do need to watch for the Acidic Swamp Ooze, which you should try to bait out with your Hero Ability, rather than letting it hit an Assassin’s Blade. If you can get a Deadly Poison on a fresh Assassin’s Blade, you’ve got 20 damage over 4 turns, which will often be plenty to finish him off. You’ll definitely want to keep some Silence Battlecries at the ready, like Spellbreaker, since you don’t want to give him free Demons courtesy of Voidcaller. Aim to keep the board clear with your spells, while going to the face with weapons and minions, and you should be sending Heigan back to the grave with ease. 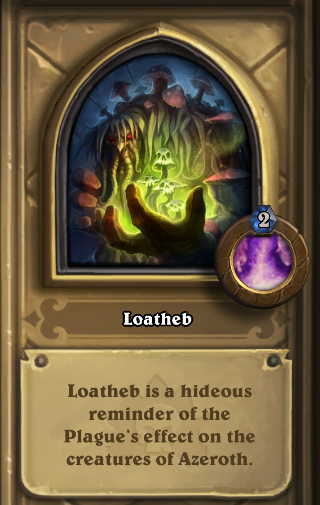 The final Plague Quarter boss is Loatheb, some sort of plagued abomination, with an overpowered version of the Hunter ability as his Hero Ability. His ability isn’t that scary at first glance, but when you realize that he starts with 75 health on normal, and 99 health on Heroic, it becomes a little more daunting. Loatheb’s deck is something of a mixed bag, with aggressive creatures like Leper Gnome and Deathcharger alongside slower minions like Spectral Knight and Fen Creeper. He also has access to some relatively cheap damage spells – both AOE and single target – that come with a serious downside for you to take advantage of. Whenever Loatheb casts Deathbloom or Sporeburst, he’ll summon a 0/1 Spore. This little guy has “Deathrattle: Give all enemy minions +8 Attack.” You can imagine how fun this is to exploit.

The best method of defeating Loatheb is probably a rush deck with a ton of little minions, but I think the Windfury gimmick deck is a lot more entertaining. Check out my video playthrough of Plague Quarter and find the Loatheb fight for a good idea of just what is possible without even trying. Having two 28-power minions with Windfury is probably the best thing that’s ever happened to me in Hearthstone. With that in mind, I went for a Shaman build to try to relive the glory.

For this match, you’ll just want to play out your minions and wait for the Spores to show up. You’ve got Kobold Geomancer to pump your one-damage spells, while Forked Lightning can either help keep his board presence to a minimum, or take out two Spores, pumping your minions for 16 attack. Windspeaker and Windfury both offer any minion in our deck the ability to do a billion damage in one turn. Alternately, Raging Worgen and Thrallmar Farseer both have Windfury built in, saving you a card if you can get them to stick around. It’s a fairly simple task to fend off Loatheb’s attacks until you get some beefy Windfury guys active, and once you’re swinging for 60 damage a turn, the rest is purely academic.

That should carry you through the Normal bosses, but if you have other suggestions for how best to take them down, speak up in the forums!