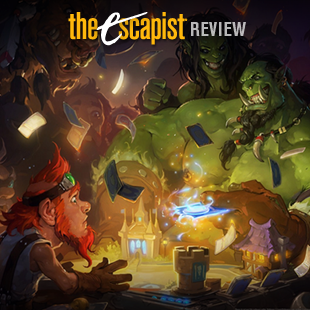 Collectible Card Games have had a fairly long run at this point, with the advent often considered the 1993 release of Magic: the Gathering. Where Magic has had better than two decades to develop a complex ruleset (almost 200 pages of legalese), Hearthstone is a fledgling game with a very limited selection of cards, and a very basic, easy-to-approach set of rules. This is both the greatest feature and biggest downfall of the game, as it opens up the target audience well beyond the reach of a rules-lawyer-friendly MTG, but simultaneously limits the sort of advanced interactions that keep players coming back to Magic for years on end.

Hearthstone is the epitome of casual. It’s easily approachable. It’s free to play. There are plenty of microtransactions. You can also sink hours and hours into it without realizing it, even though a match can take as few as five minutes. Most importantly, it’s highly addictive. Whether you’re drawn to the collection side of things, powering through Arena runs (which we’ll touch on later) for the prize pack, or drawn to the competition available in Ranked play, if you’ve got a compulsive bone in your body, you’ll have a hard time putting it down.

The core gameplay is uniquely simple. Each turn you draw a card and gain one Mana Crystal. You cast increasingly powerful spells and minions, which you use to try to whittle your opponent’s life from 30 to 0 before they whittle yours down. There are nine classes, ported over from World of Warcraft, which makes it a really neat universe tie-in, and, in true Blizzard fashion, the essence of each class was captured to a tee with their unique cards and abilities. Each class has a “Hero Ability” which they can cast once per turn for two mana. These range from the Mage’s “Fireblast,” which deals one damage to any target, to the Priest’s “Lesser Heal,” which heals any target for two.

The beauty of Hearthstone‘s gameplay is its simplicity. There’s no complex ruleset that you need to learn in order to understand what’s going on. You just cast your spells and summon your minions. It’s all the fun of a more complex CCG, distilled down to the most enjoyable components, with a heavy focus on creature combat, which is easily overpowered by the flexibility of spells in other games.

While the terms TCG (Trading Card Game) and CCG (Collectible Card Game) have been used largely interchangeably for a while now, the fact is that Hearthstone is truly a CCG. There is no way to trade cards or gold, so your collection is only ever yours. There is a crafting system in place, however, which allows you to destroy your unwanted cards in exchange for Dust, which can be used to create any card in the game. With a good portion of all Legendaries (the highest rarity) being largely worthless, it’s good to have a way to trade in the junk cards for something that you’ll actually use.

Once you make it through a very lengthy tutorial, you’ll be able to play in basically three modes. Casual Play mode lets you play games with decks you build from your own collection with no penalty for losing. It’s a great way to test out a new deck build, or just get your feet wet when it comes to a live match. Ranked Play is the same, except it pits you against tougher players, all vying to earn stars, which add up to ranks. You won’t lose stars in the first few ranks, but once you get past rank 20 or so, you’ll risk losing a star when you lose a game. On the flip side, winning three or more games in a row awards Win Streak bonus stars, helping you rank up even faster. There’s not much more than bragging rights on the line for ranking up, but the launch introduced one minor incentive: novelty card backs.

The third play mode is The Arena, where you’ll assemble a deck from a random assortment of cards. The game presents you three cards and you’ll select one to add to your deck. After 30 selections, you’ll take your deck out into the wild, and try your luck against other players’ drafted decks. While there’s a lot of randomness involved in Arena, it’s also some of the most fun you’ll have in Hearthstone. Your run ends when you’ve lost three matches, so your goal is to simply win as many games as possible before you get beat three times. The more wins you get, the better the prizes, up to a maximum of 12 wins which offers the grandest of grand prizes. No matter what, though, even if you go 0-3, you’ll still get a pack out of the deal, making it an economical way to participate in the microtransactions. It’s $1.99 or 150 gold to play Arena, which, given the one to three hours of fun and the $1.49 pack of cards you’ll get out of it, actually seems a fairly reasonable cost. If you don’t want to spend money, though, the 150 Gold is fairly easy to acquire as well.

There are two reliable ways to earn gold in Hearthstone, namely Play Mode and Daily Quests. For every three wins you get in either Casual Play or Ranked Play, you’ll earn 10 Gold. Additionally, every day, you’ll get a Daily Quest, like “Cast 40 Spells” or “Win 2 Games With Paladin or Priest.” Most of them offer 40 Gold for completion, but some offer more. If you complete your quests every day, and play a couple games in Play mode, you’ll be able to do an Arena run about twice a week for free.

Despite a lengthy beta, the live game still holds a few minor bugs, but they’re strictly aesthetic, like floating minions. These blemishes don’t detract much, if at all, from the experience, but it does seem unlike Blizzard to have issues this common to persist through a game’s launch. Server stability, on the other hand, has never been a problem in my experience. From closed beta through launch, I’ve only ever seen the servers down for scheduled maintenance. Additionally, matchmaking takes 10 to 30 seconds in almost every case, so you’ll never have to wait long for your next match.

The sound and visuals are very World of Warcraft, so if that motif is to your liking, you’ll adore the cartoony characters and animations in Hearthstone. Even individual cards have their own sounds, so casting certain murlocs, you get the classic MRGLGLGLGL to boot, which adds another layer of enjoyment to the experience. The only major downside is the fact that your hard earned collection is completely intangible. That said, there’s a ton of value in being able to include the same card in multiple decks.

Hearthstone is the kind of game that virtually everybody can enjoy for at least a while. Some will burn out quickly, and others will play for a long time to come, but it’s hard to imagine anybody that simply doesn’t appreciate the simple elegance that is the stripped down ruleset of Hearthstone. If you love Magic, Hearthstone will offer a good diversion, even if it may seem a little simplistic in light of your experience. More so, if you just want to love Magic, but don’t have the wherewithal to plod through 200 pages of rules, the barebones Hearthstone is exactly what you need.

Bottom Line: Hearthstone might not fully scratch the strategy itch of the most advanced CCG/TCG players, but it makes an impressive attempt. The rules are simple, so anybody can get the hang of it, but there are enough deck variations available that only skilled deck builders and players will make it high in the ranks.

Tales of Symphonia Chronicles Review – Work Together for Peace