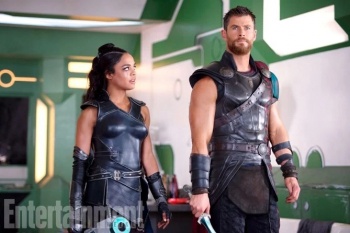 Thor got a makeover.

Thor: Ragnarok won’t be released until November of this year, but that doesn’t mean that the marketing can’t begin in early March. As such, Disney and Marvel have released the first photos from the movie. Here they are, courtesy of Entertainment Weekly.

The pictures give us our first look at Thor (Chris Hemsworth) without the long flowing locks of hair we’ve seen him have in previous films. He also appears to have ditched his hammer, at least for now, wielding blue swords in its stead.

Directed by Taika Waititi, Thor: Ragnarok is scheduled to hit theaters on November 3, 2017.