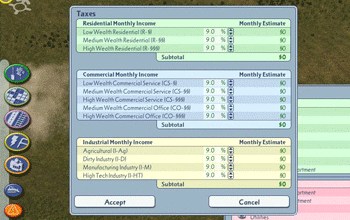 If U.S. Presidential hopeful Herman Cain’s “999” tax plan seems familiar, it might be because it’s the default tax rate settings in SimCity 4.

Turn your mind back to 2003 and the release of SimCity 4. Collecting taxes is naturally part of the game – you can’t run a city without ’em, after all – and part of the “fun” is finding the right balance between bringing in enough money to keep the streets clean and cops paid without driving your citizens to a tax revolt. And what middle-of-the-road rate did the game use as a default? You guessed it: nine percent commercial, nine percent industrial and nine percent residential. Call it Sim999.

“While we at Maxis and Electronic Arts do not endorse any political candidates or their platforms, it’s interesting to see GOP candidate Herman Cain propose a simplified tax system like one we designed for the video game SimCity 4,” Maxis Senior Producer Kip Katsarelis told the Huffington Post.

Is Cain a closet Maxis fan? “Probably not,” according to a receptionist at the Ohio Wells Fargo office of Cain adviser Rich Lowrie, who came up with the plan. “I don’t think he’s much of a game person.”

Presumably that means he doesn’t know about “weaknesspays,” either. Pity.