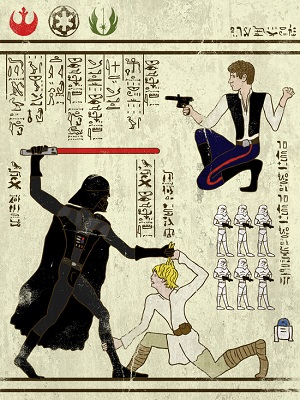 Throughout human history, sequential art has remained one of the most consistently popular ways that people have opted to tell each other stories and convey information. In the modern era, you need look no further than comic books for evidence of that. Going a tad further back, before companies like Marvel and DC were even a dream, cultures like ancient Egypt’s relied on illustrated hieroglyphics to convey information both important and mundane.

And while hieroglyphics were basically utilitarian in nature, they also distinguished themselves among other artifacts by looking really cool. Inspired by this coolness, freelance artist Josh Ln took it upon himself to transform his favorite works of geek into pieces of art flavored to look like hieroglyphics. Dubbed the “hero-glyphics,” the resultant art series would cover a dozen different franchises from comic books, movies, television and video games including The Avengers, The Legend of Zelda, Ghostbusters and more.

The end results, as you might expect from a concept this nifty, are nothing short of fantastic and would be the perfect decoration for any geek’s wall. If you happen to fancy one of Ln’s hero-glyphics, they can be found for purchase in his digital storefront at the website Society6. Take a look at them and let us know what you think!
Source: Society6

8 Guilty Pleasure Games No One Wants to Admit they Play