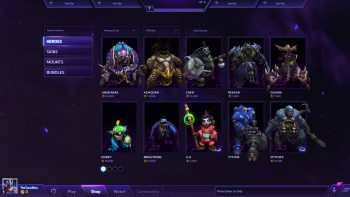 The prices for skins, champions and mounts in Heroes of the Storm‘s in-game shop will likely stay the same.

Blizzard’s entry into the MOBA genre, Heroes of the Storm, has just entered the final stage of its closed alpha test, wiping all accounts and refunding all purchases. The good news is that no more wipes are planned before now and release, so you can make purchases without worrying about losing them before the game goes live. Unfortunately though, for those of you who were holding off in the hopes that the in-game shop’s prices may go down, Blizzard has just told us that what you see is what you’ll get, as the prices are unlikely to change.

When we reached out to a Blizzard PR rep to inquire about pricing, he told us, “As for pricing, it’s unlikely that prices will change.”

I would strongly advise anyone planning on spending money in the game to take a look at the bundles, in particular, the Heroes Variety Bundle which includes 10 heroes for just $35. The deepest discount bundle is the Starter Bundle which has three heroes and a mount at a 77% discount for $5.49.

The latest patch also introduces Anub’arak, from the World of Warcraft universe, and Azmodan, from the Diablo universe, as new playable heroes. It also moves the game from its self-contained alpha servers to its respective players’ home region servers, meaning that players can access their existing Battle.net friend list.

NB: All prices listed are from the Oceanic region store, as I am currently unable to access the North American store from my game client.