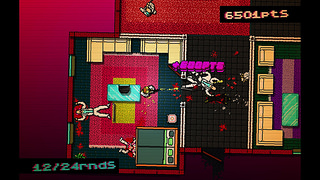 The landmark hit by Dennaton Games and Devolver Digital will soon be available on the PlayStation 4 with more new features than you can shake a bloody katana at.

According to PlayStation.Blog, the team responsible for the port wanted to keep it as close to “perfection” as possible, but at the same time chose to utilize some new features made possible only by the PlayStation 4. Players can now use the DualShock 4′s touch pad to look around and lock on to enemies, and can actually shake the controller to perform execution moves when an enemy is pinned on the ground. The sounds of the execution moves are broadcasted through the speaker on the DualShock 4 itself, giving the experience a more visceral feel.

Since the release of Hotline Miami, Dennaton Games and Devolver Digital have been working on the game’s sequel Hotline Miami 2: Wrong Number– which was announced in August of last year for the PlayStation 4 and PlayStation Vita. Hotline Miami 2 is slated for release later this year.

What do you think of the new features? Let us know in the comments!

Even Death May Die: Sandy Petersen Talks Call of Cthulhu

Don’t Miss The Call of Duty Reveal From GamesCom