House of Cards muzzles Frank Underwood, offering a closer look at the man who tore down an administration.

Through the first two seasons of House of Cards, we watched Frank manipulate, deceive and kill his way to the presidency, leaving destroyed political and business leaders in his wake. While he faced unexpected challenges and obstacles – both public and private – during his rise to power, he always maintained control over the political players of Washington in one way or another.

Not surprisingly, Frank’s agency is restrained more than ever now that he occupies the most powerful office in the country. In order to be an effective president and secure his legacy, Frank must act judiciously and consider the consequences of every action – something he fails to do repeatedly this season. He constantly has his decisions and mistakes as president thrown in his face, ultimately leaving him more powerless than ever.

Unable to act upon others as he is used to doing, Frank is forced to restrict himself, making threats and promises he knows he can’t keep. Even though he now has the largest reach in his career, his frustration must be directed inward. We are left with a formerly terrifying anti-hero who is humanized in his impotence.

This results in a more intimate story about Frank Underwood, which would be incomplete without an examination of his marriage to Claire. Their unconventional yet highly effective relationship is the chief story in House of Cards’ third season. Previous seasons made very clear the strength of their connection and how dedicated they both are to their mutual pursuit of power. Claire has, on occasion, struggled to reconcile her conscience with Frank’s ruthless pragmatism, but most television marriages can’t hold a candle to how much they trust and depend on one another.

The third season explores the dynamics of power within their own relationship through demonstrations of how they exercise their individual power outside of their marriage as president and first lady. With their marriage more public than ever, Claire’s own agency in relation to Frank is made clear, and given her strength and brilliance it comes as no surprise that she is uncomfortable with this dynamic. 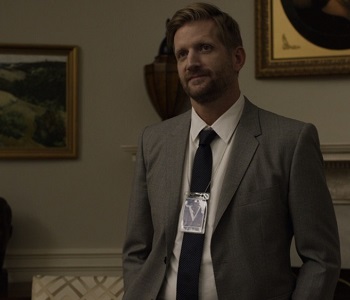 Tom is hired by Frank to write his biography as a way of selling the country on his jobs program, America Works. Over the challenging months of Frank’s presidency, Tom travels with him across the country, visits him in the White House at all hours and spends time with Claire.

As far as viewers are concerned, Tom functions as a therapist for Frank. He opens conversations with superficial questions, but takes opportunities to guide their talks into explorations of Frank’s past, his marriage and his emotional state. Of course Frank often lies, but it’s the few moments of truth that strike Tom and provide him a road map to navigate Frank and Claire’s deceptions to find the story he needs to tell.

While Tom pushes Frank’s internal boundaries, Viktor Petrov pressures Frank externally. Lars Mikkelson is unrecognizable from his role as Charles Magnussen in BBC’s Sherlock, and his caricatured version of Vladmir Putin may easily become the image House of Cards fans associate with the actual president of Russia.

Viktor is the single individual that forces Frank’s hand more than any other; he takes away Frank’s agency while remaining untouchable, making him Frank’s most hated adversary. Russia’s homophobic laws play a large part in the conflicts throughout the season, and is a particularly poignant concept given Frank’s closeted bisexuality.

A spoiler from the beginning of the first episode follows. 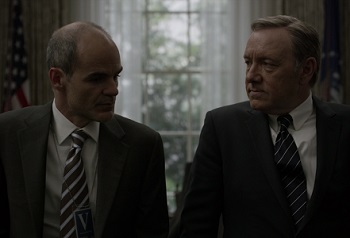 Of the many returning characters, House of Cards’ third season’s secondary story arc is about Doug Stamper, Frank’s former strategy director. Most viewers (including myself) presumed Doug dead at the end of the second season, killed by Rachel Posner, someone who could reveal destructive secrets from Frank’s past. Outside of the opening few minutes of the third season, the entire first half of the premiere episode solely focuses on Doug’s recovery and difficulty coping.

Sidelined by Frank when all he wants to do is work, Doug obsesses over finding Rachel, and he enlists season two’s hacker, Gavin Orsay, to assist him. Even though Doug is barely allowed to speak to Frank, he struggles to prove himself worthy to the president throughout the season as he wrestles with his own personal demons.

House of Cards follows its previous seasons as beautifully produced television. The show is visually stunning even in mundane settings and drab offices with a score that never dominates a scene but always succeeds to drive the emotions of the viewers. Thanks to perfect pacing, every episode feels dense yet quick, and the intelligence of the audience is respected in every scene. It’s impressive that with storytelling this intricate, the show remains easy to follow without any hand-holding.

The series’ cameos continue, with media figures playing versions of themselves interviewing Frank or talking about Washington politics. Two members of Russian activist band Pussy Riot actually play surprisingly significant, if brief, roles in the show. Both recently served time in prison for their activism in Russia, so their inclusion is a clear indication of the show’s views on Russia’s policies.

House of Cards isn’t scared to use its platform to make statements. For instance, a number of scenes are outright attacks on Walmart’s wages and encouragement of employees to take advantage of government benefits. Where most series would use a fictitious organization, House of Cards seeks to ground itself in reality wherever possible. 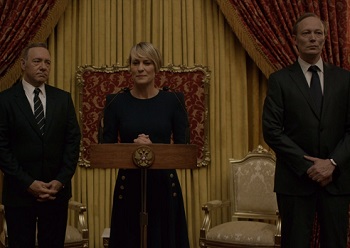 House of Cards continues to question the fundamentals of an American political system populated by those primarily concerned with using their power to keep it. Simultaneously, the show examines the humanity of even the most unscrupulous of characters and the dynamics of power in romantic relationships.

Surprising absolutely no one, the acting in House of Cards’ third season is phenomenal across the entire cast. Kevin Spacey is Frank Underwood, Robin Wright is walking perfection as Claire Underwood, and both major newcomers, Paul Sparks and Lars Mikkelson bring nuance to characters that could easily fall into one-dimensional, walking tropes.

How frustrating it must be for Frank Underwood. Driven by a hunger for power, he reaches the highest position in American politics only to learn he is now powerless. Perhaps he has yet to learn how to effectively wield the presidency, but if he does, the man we see in season four will be terrifying.

Bottom line: A more intimate story than past seasons, House of Cards’ third season thankfully shifts the storytelling of the series rather than becoming a stale retread of the same stories.

Recommendation: Anyone who loves political dramas needs to marathon this one, but even those with a distaste of D.C. politics can appreciate the examinations of humanity and marriage.

Join us in the comments to discuss the third season.