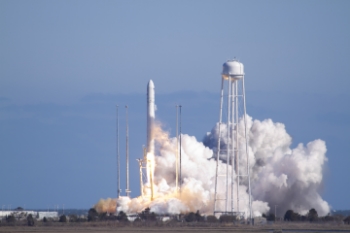 Boeing and SpaceX have been awarded contracts by NASA to build the next generation of manned space flight shuttles, which should be operational in 2017.

Compared to the 1960s space race, NASA isn’t the space-faring organization it once was. Sure, it’s still supporting several space-based initiatives, but budget cuts led to the dismantling of its shuttle program and forced the agency to turn to Russia for its manned space flights. Understandably, this has been a somewhat problematic relationship on occasion, prompting NASA to consider space flight through commercial initiatives.

Now NASA has announced that it’s getting back into manned space flights thanks to a partnership with Boeing and SpaceX. These companies have been contracted to build new shuttles that will fly astronauts to the International Space Station starting in 2017. Boeing will be constructing its CST-100 spacecraft design, while SpaceX will build the Crew Dragon.

“From day one, the Obama Administration made clear that the greatest nation on Earth should not be dependent on other nations to get into space,” NASA Administrator Charlie Bolden explained. “Thanks to the leadership of President Obama, the hard work of our NASA and industry teams, and support from Congress, today we are one step closer to launching our astronauts from U.S. soil on American spacecraft and ending the nation’s sole reliance on Russia by 2017. Turning over low-Earth orbit transportation to private industry will also allow NASA to focus on an even more ambitious mission – sending humans to Mars.”

Boeing and SpaceX’s contracts are worth a combined $6.8 billion (about $4 billion for Boeing, $2 billion for SpaceX). While specific terms have yet to be disclosed, the awarded contracts include test flights and options for two to six operational missions. Back in 2013, SpaceX also secured a $1.6 billion contract to keep the International Space Station resupplied.

NASA’s current contract with Russia ends in 2017, at which point these commercial shuttles are expected to take over. At a press conference today, NASA officials noted that this will be the first part of a larger initiative to expand space travel beyond our lunar orbit in the 2020s.

FIFA 15 25% off Pre-Order Before Tuesday’s Kick Off