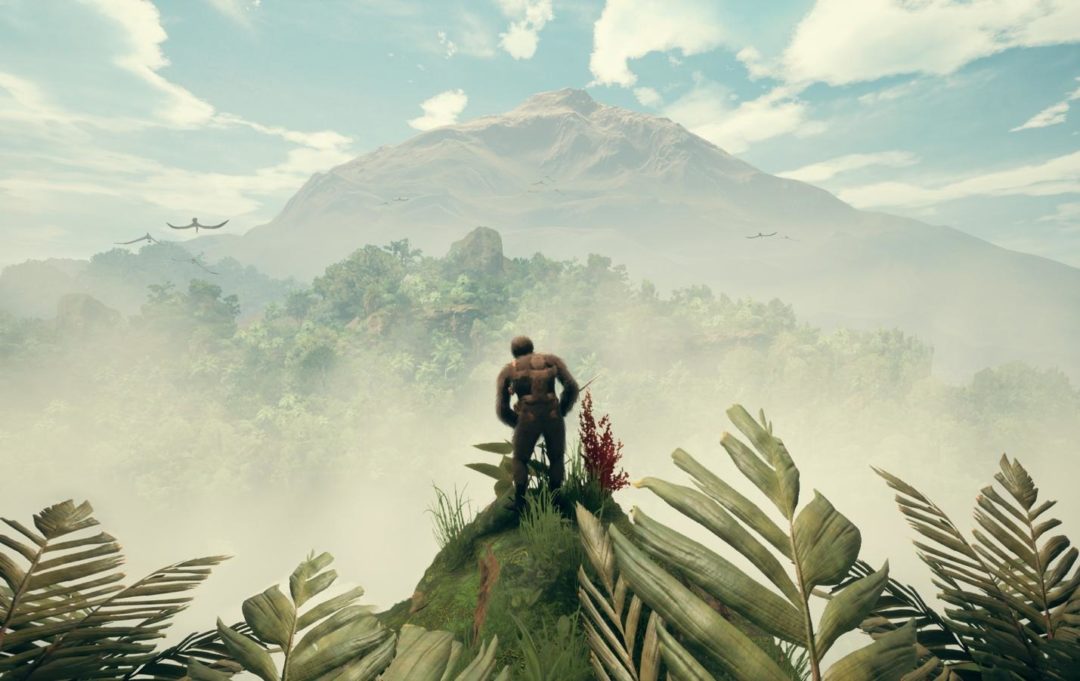 As a geneticist, I often think about the way genetics and evolution are represented as components of the narratives and mechanics in games. Genetics is often used to explain why heroes or villains have special powers. The deformed enemies of Rage 2 and Fallout are “mutants,” and “mutation” is regularly used as a mechanism for acquiring new abilities, such as in Double Fine Productions’ recent game, RAD.

The word mutant is a genetic technical term referring to an altered form of a gene or an organism that possesses such a gene. Mutants walk among us. We could actually all be described as the children of mutants — the descendants of ancestors who acquired genetic mutations over thousands and millions of years that caused them to differentiate and evolve into the modern humans we are today.

Ancestors: The Humankind Odyssey, the new game from Patrice Désilets and the development team at Panache Digital Games, aims to represent mutation and evolution as they truly occur in nature. It’s a commitment to scientific accuracy that parallels the focus on historical accuracy that Désilets’ showed as creative director for the Assassin’s Creed games. 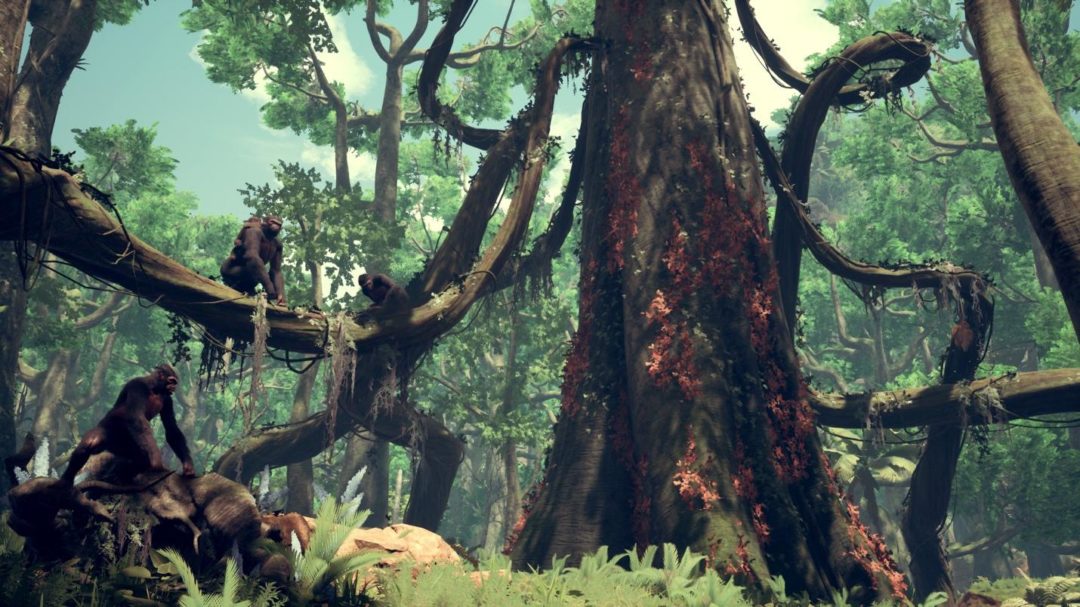 “Evolution Is Not Set in Stone”

Just after starting up a new game, Ancestors presents you with white text on a black background that reads:

“Good luck, we won’t help you much. And remember… Evolution is not set in stone, it is your path to forge.”

The game afterward progresses through scenes of animals in the jungle and predators hunting prey and then becoming prey to even bigger predators. Then it gets to an ape with a baby who is attacked by a giant prehistoric eagle. The baby falls, and the scene cuts away.

After that, players find themselves in control of that scared and helpless baby ape. I managed to navigate it to a hiding space, and then, suddenly, I was in control of an adult ape in another location. I was surrounded by other apes — my clan — and I could hear the cries of that lost baby in the distance. I did what any parent would do when they hear a lost, crying baby: I went to go find it and help.

This is how the game teaches you to play. Rather than instructing you with words, it gives you a toolbox and lets you discover how to use it on your own to accomplish whatever goals you set for yourself. Désilets said he tried to set the tone with that into text.

“This was to tell the player that it is not about what we designed for them, [but rather] it will be ‘their’ game,” Désilets said. “It’s about our [human] path, and inside that path you can forge yourself.”

In other words, there is indeed an evolutionary path to be followed in Ancestors, but the game does not force you to accomplish all the various goals or explicitly lay them out for you. Désilets said the idea is to tap into our “biological programming” and approach the game with an open mind.

“Biologically, we’re programmed to survive in the savannah,” he said. “We made a strong decision not to tell you much.”

Mechanically, Ancestors is essentially an action-adventure game with roleplaying elements. The moment-to-moment gameplay is about experiencing new things as part of a tribe of pre-humans, learning new skills via the game’s Neuronal skill tree progression system, and then solidifying those skills in offspring so they pass them on to subsequent generations.

The Neuronal skill tree actually looks a lot like a series of neurons with axons, the long threadlike end of a nerve cell, connecting them together.

“It’s a brain, but we tried to represent it as graphically as possible,” Désilets explained. 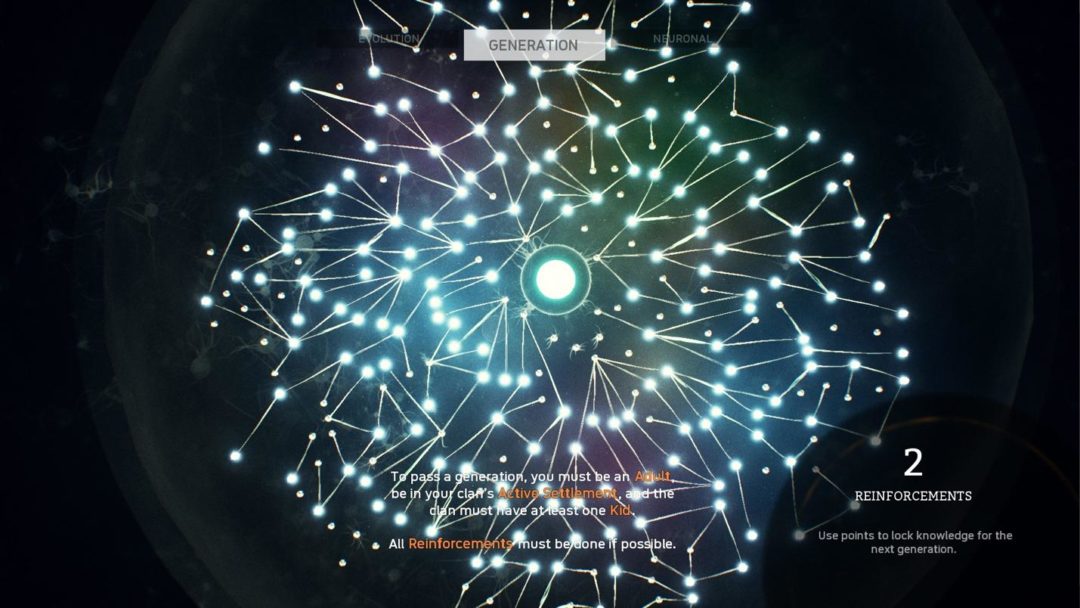 Those neurons start with very high-level classifications like Intelligence, Senses, Motricity, and Communication, but they grow more advanced as you experience more in the game. You can make the entire clan learn the skills represented by those neurons by expending neuronal energy, which is basically experience points. You earn neuronal energy by taking at least one of your clan’s babies with you when you go into the world and explore.

Désilets said his team designed the game so that protecting the babies and progressing through generations would be a priority.

“At first, (the purpose of the babies) was just experience,” he said. “But then I realized they also exist to gain mutations to help them survive.”

The Neuronal skill tree contains a system of random spontaneous mutations that babies can be born with, which unlock new skills. This was one of the elements that impressed me most as a geneticist. A child might be born with a spontaneous mutation that alters their metabolism so they can better digest food, for example. From that mutation, the potential for more neuronal growth arises as this new advantage spreads to the rest of your clan once you evolve, enabling them to learn new things they never would have even had access to without it. This is very much how scientists think beneficial spontaneous mutations might arise and become prevalent in a species during the process of evolution.

Désilets said his team began referring to the random generational benefits as “loot box babies.” While spontaneous mutations can have harmful rather than helpful effects, he said they avoided those because “we felt the game was difficult enough.”

Besides neuronal energy and spontaneous mutations, the babies also play a major role in locking in skills that are learned in one generation so that they are preserved in subsequent generations. 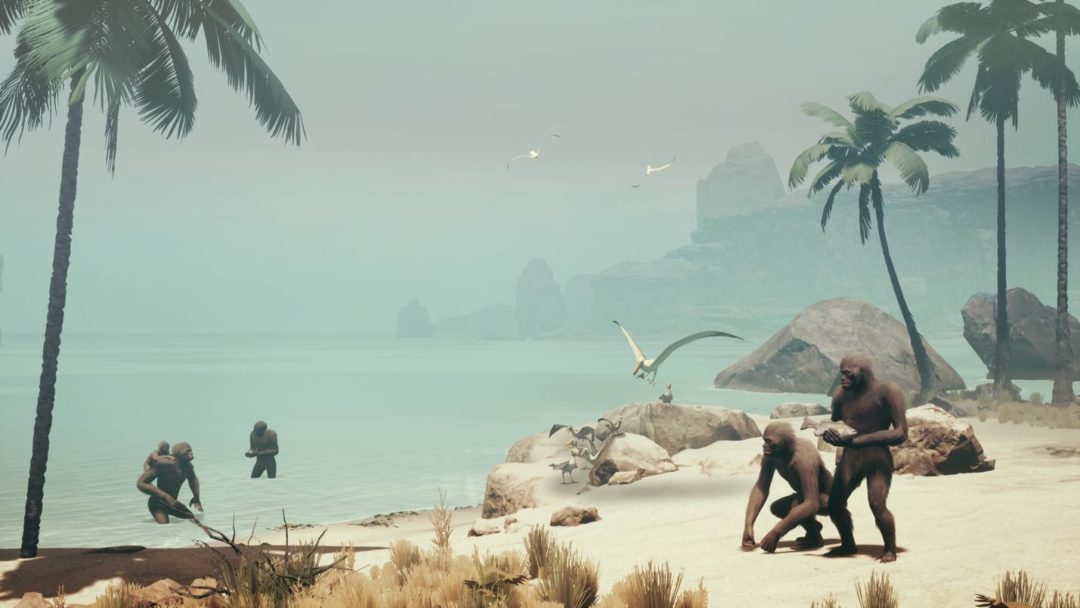 Evolution as a Game

The final major element of Ancestors’ gameplay loop is Evolution. Once enough major experiences have occurred in your clan of pre-humans, the game takes a step back and shows you that all of the things you did with your apes actually occurred over the span of thousands of years.

I was so relieved after the first time I evolved the clan in Ancestors. My scientific mind had been growing concerned that my clan was acquiring spontaneous mutations and new neuronal skills at an absurdly high rate. In just five or six generations we had learned at least 20 new abilities and acquired numerous beneficial mutations. But when I hit that Evolution button, the game showed me that all that I had accomplished had taken well over 100,000 years of evolution to occur. The five generations I had just played were symbolic for the hundreds of generations that it actually took to accumulate those skills and mutations.

The team developed a spreadsheet with all the missions that contribute to the evolution process, ranked them by difficulty, and ensured that the associated reward for completing them would adjust based on which evolutionary stage the clan is at when they’re completed.

“Finding a normal fruit and eating it is a basic evolution feat — you’ll get benefit by discovering it earlier in evolution than later,” he said. “Killing a predator will give you a lot more years [of evolution].”

No matter when you complete the missions, Panache made sure to tweak things so that you always take around 8 million in-game years to evolve to the final stage in Ancestors. While they wanted to allow players to have their own unique experiences, they also wanted to represent the truth behind the evolution of our species — how long it took and what challenges it involved.

Désilets said he spent the first two years of the Ancestors project researching human ancestral species. The team consulted experts including a paleoanthropologist, primatologist, and climatologist. But they also had to occasionally take liberties with the milestones in their evolutionary spreadsheet because even scientific understanding of human evolution was changing during that time.

“When we started the process, we had a scientific timeline to work from. And at the end of the development process? The scientific timeline had changed!” he said, referring to a 2015 discovery that Australopithecus africanus had been using tools and had human-like hands, something that had been proposed but considered doubtful before that.

The Future of Ancestors

While Ancestors includes many elements of evolutionary science, there are others that are left out like intermingling and interbreeding between different sub-groups and species of pre-humans. Thousands of years ago, modern humans were living alongside and breeding with our close relatives, the Neanderthals and Denisovans. In fact, many of us have some small amount of Neanderthal DNA in our genomes. We’re not sure why those other species died out, but Désilets said he plans to explore their impact in future volumes of Ancestors.