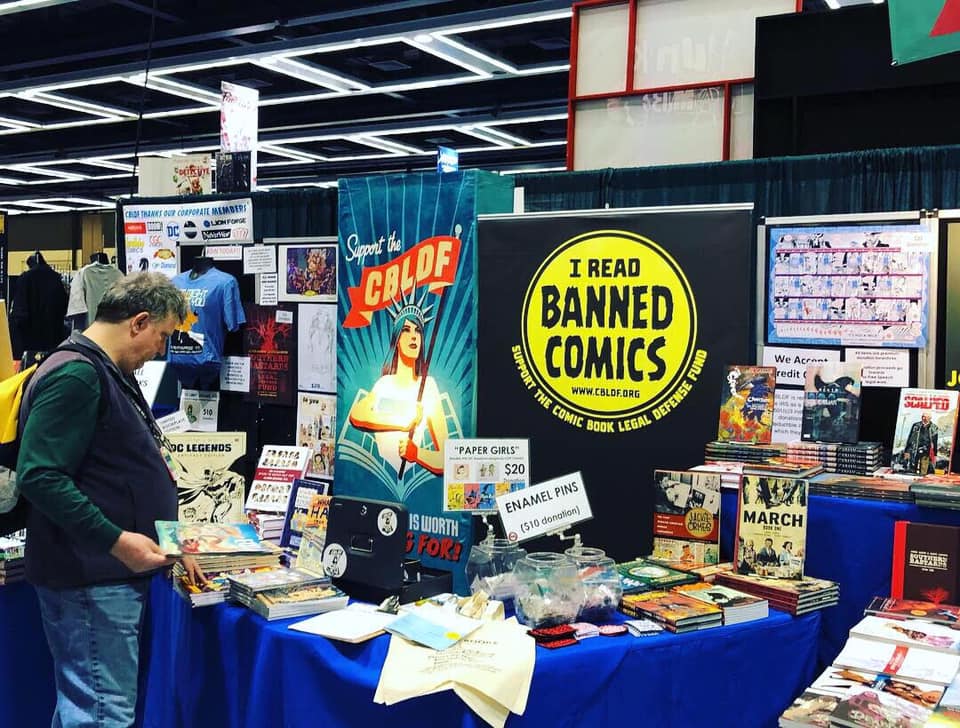 One of the obvious, but still surprising facts that I encounter pretty much every day while working as a lawyer is the reality that pretty much every interest group you can think of — and even some you can’t — has an organization to represent their interests, and has lawyers.  Bakers have lawyers, refrigerator engineers have lawyers, the manufacturer of your office chair and desk has a lawyer, and lawyers definitely have lawyers.  As a comic book enthusiast, I was excited to learn that comic book creators and consumers also have an organization that advocates for their interests and legal representation.

This week, we’ll learn a little bit about that organization — the Comic Book Legal Defense Fund (CBLDF). I recently had the privilege of interviewing Charles Brownstein, the executive director of the CBLDF.

I asked Charles to tell us a little bit about the CBLDF and the kinds of legal support it provides to the comic book community, and I also attempted to identify and challenge the scope and limits of the organization’s advocacy efforts.

CBLDF Basics: What Is It About?

What is the Comic Book Legal Defense Fund?

Comic Book Legal Defense Fund is a nonprofit organization dedicated to the protection of the First Amendment rights of the comics art form and its community of retailers, creators, publishers, librarians, and readers. The CBLDF provides legal referrals, representation, advice, assistance, and education in furtherance of these goals.

What kinds of legal issues does the CBLDF encounter?

CBLDF is dedicated to protecting First Amendment rights in relation to the comics medium.

At the moment, we’re most frequently called upon to protect access to comics and graphic novels in school and library settings. Frequently, individual community members will object to the content in a library or classroom resource and attempt to have it banned. CBLDF provides guidance, letters of support, and one-on-one counseling to protect access to these resources, which are most often very mainstream content, including acclaimed books for kids like Raina Telgemeier’s Drama or the Tamaki cousins’ This One Summer.

We are also frequently called upon to help manage or consult in relation to First Amendment emergencies. This can range from legal action involving material alleged to be obscene or harmful to minors, to cease and desist actions against fair use, to searches and seizures of constitutionally protected material at customs. Most of this work is executed without publicity because we’re able to achieve a successful resolution before the matter goes to court.

Are there any legal issues that are unique to comic creators? If so, what are they?

Because most comics are created in collaboration, creators need to be savvy about the law with regard to shared creation. Likewise, because some of the most lucrative work is conducted in a work-for-hire context, creators need to understand the law in that area and how it affects them. These issues aren’t unique to comics creators, they just occur more in the creative life of a comics author than they may for authors in other media.

Does the CBLDF work primarily with independent comic book creators, or with the bigger companies (i.e., Marvel or DC)?

CBLDF’s work is less driven by individual organizations, and more driven by response to specific challenges. We’ll often be called upon to protect access to a book published by one of the larger publishers, but it’s in the context of aiding the local librarian, educator, or retailer using the resource, not in the context of representing the publisher. We do receive support from most of the field’s publishers, large and small, which makes it possible for us to do this work.

What is the most important legal challenge facing comic book creators or consumers?

We’re currently in an environment where we’re seeing a steady stream of challenges to legitimate speech in a way that affects the readers and educators using comics.  For example, there’s a trend in proposed legislation that aims to treat pornography as a public health and safety concern as a way to mandate intrusive filtering of devices that access the internet. This kind of constitutionally unsound thinking poses a significant risk to a great deal of legitimate content, and to the rights of individuals to access information in a way that could threaten comics readers, retailers, and makers.

We’re also seeing an uptick in searches and seizures of Japanese comics content at customs, where agents are looking for obscene material related to child sexual abuse and targeting constitutionally protected content. This is an especially volatile area because of cultural differences that relate to content and art style coupled with a language barrier in relation to speech that is protected by our constitution and is broadly available in its country of origin.

Is it the CBLDF’s position that all censorship is bad? Can you think of any speech regulations that should apply to comic books?

The First Amendment guarantees freedom of expression, full stop. The government has no business interfering in what people can read, write, draw, or think. Individuals need to have the right to make up their own minds about their own minds. If that means they don’t want to access certain information, or don’t want their kids to see certain content, that’s fine. But they can’t make that decision for other people or other people’s children.

The Comics Code Authority (CCA) was formed in 1954 by comic publishers to self-regulate the comic book industry and prevent government intervention. On the surface, the CCA seems similar to the Entertainment Software Review Board and the Motion Picture Association of America.  While those organizations are still active, the CCA collapsed in 2011. Since the CCA regulated the content of comic books, I wanted to see what Charles and the CBLDF could tell us about how it fit into the broader landscape of comics culture.

Can you provide a birds-eye view of what happened with the CCA?  What caused its collapse?

In the 1940s and 1950s, comics were the target of moral panic in relation to the increase of juvenile delinquency that occurred following the end of World War II. Spurred by the book Seduction of the Innocent, the field came under intense scrutiny, including being investigated by the Senate Judiciary Committee’s Subcommittee to Investigate Juvenile Delinquency.

William M. Gaines, publisher of EC Comics and later Mad Magazine, voluntarily testified before this committee, disastrously so. At once defiant and certain that the lawmakers would see him as an honest entrepreneur creating stories for an eager and intelligent audience, Gaines failed to apologize for some of his more shocking content. Faced with an angry public and the threat of regulation by the government, the comics industry was backed into a corner. They responded by establishing the Comic Magazine Association of America (CMAA), which instituted the Comics Code Authority, a censorship code that thoroughly sanitized the content of comics for years to come.

Almost overnight, comics were brought down to a level appropriate only for the youngest or dimmest readers. Horror, crime, science fiction, romance and other genres appealing to older and more sophisticated readers were functionally hobbled for a generation. Longer in the case of romance comics.

The Code went through several changes in the decades after its adoption, and ultimately ceased to exist in 2011 after having grown irrelevant to the distribution of comics thanks to changing cultural standards, the erosion of the newsstand business, and the rise of sales through the comic specialty market and bookstores.

The CCA is infamous for having stringent standards that functionally amounted to censorship.  Do you think that reputation is fair? Did the CCA change its approach in its final years?

Yes. The Comics Code was a self-censorship code implemented to assure the public that comics were appropriate for an audience of children. It went through two major changes, a 1971 revision and a 1989 revision that adjusted the censorship to reflect contemporary standards. By 2011, comics distribution had changed in a way that the Seal of Approval no longer made a difference in whether comics were racked or not, and so the CMAA withered away.

Do you think the ESRB and MPAA should follow suit? Why? If not, what makes those organizations different?

The ESRB and MPAA aren’t comparable to the Comics Code. Those are ratings systems that account for multiple audiences. The Comics Code was a seal of approval modeled on the Hays Code assuring that any comic bearing that seal was appropriate for the broadest general audience. Under the Comics Code, mainstream distribution generally came down to a book being approved by the Code or not — it was a binary system. Ratings systems behave differently and serve a different function.

I noticed on your website that CBLDF obtained the intellectual property rights to the Comics Code Authority materials.  Can you tell us how that happened, and how you’re using the materials?

As the CMAA was closing shop, we got a call from a legal executive at DC Comics who told us the Code was winding down and that they wanted to contribute the IP in the Seal of Approval to CBLDF. We were told, “This has been a symbol of censorship for almost 50 years. We want to see you use it to fight censorship.” So we have, by continuing to produce education resources about the history of the Code and to produce fundraising merchandise with the Seal to help support our mission.

Is there anything else you think our readers should know about the CBLDF?

For more than 30 years, CBLDF has been at the front lines of protecting comics’ First Amendment rights. We’ve produced hundreds of pages of resources, educational books and pamphlets, lectures, podcasts, and more that you can browse at cbldf.org. Please help us continue this valuable work by becoming a member or making a contribution!

Xbox, Ubisoft, and Gaming’s Other Giants React to Stadia

Games Are Hell and Returnal Knows It

When’s the Right Time for Xbox and PlayStation to Leave Last Gen Behind?