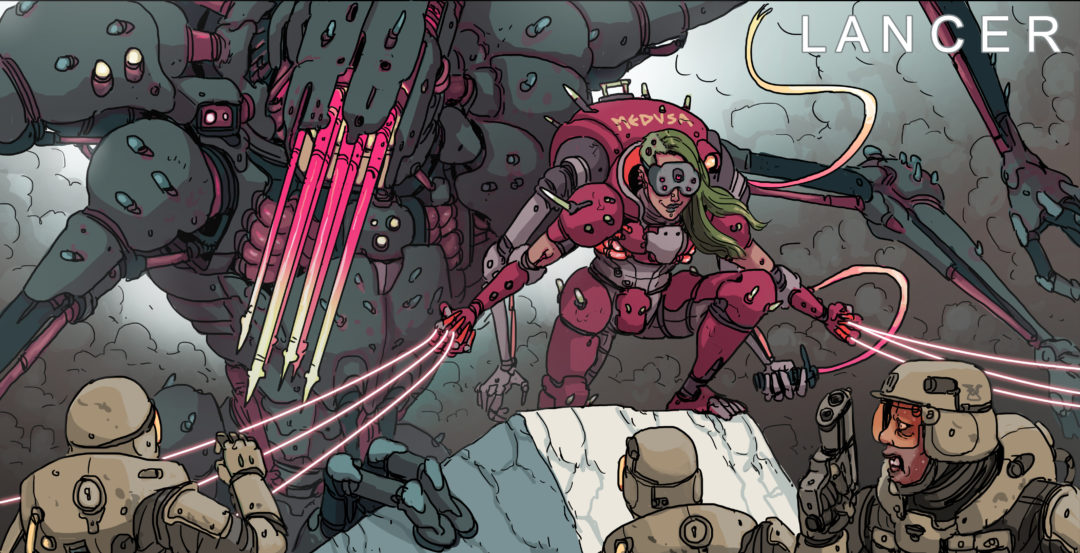 I want to talk about Lancer’s development not as a nuts-and-bolts triumphant-engineering story — that’s my design partner’s purview — but from a writer’s perspective.

Lancer started on a bike ride Tom and I took in the high summer of July, 2017, somewhere near East Portland. I don’t remember much of what we had been doing or the specifics of our conversation. What I do remember is a feeling: agency. The beginning of a broad conceptual space that was exciting.

I don’t think we ever planned for Lancer to become what it is now. It was a side project that became a shared project through mutual labor, and then a job through circumstance. Looking back on the start of the process I recall on my end a sense of desperation, the worry of loss, of a constant and unrelenting imposter syndrome. Though I am a writer, my work has never seen much circulation or publication. I had an MFA and a dead manuscript languishing in my desk, killed through a combination of day-job fatigue and emotional exhaustion. Early writing for Lancer was the first time in a long time where the thing I loved  — writing — actually matched in practice what I claimed in public. I loved to work on Lancer, and I didn’t want to lose that feeling again.

In the early days I nearly did.

When Tom and I started Lancer, I was a showrunner at a local radio station in Portland. Five days a week I produced a live two-hour morning news show on the air with little training or administrative support, coordinating a team of tremendously dedicated producers and engineers. The pay was so low that we all worked at least one other job to stay afloat. Our schedules made ghosts of us: from five in the morning until ten in the morning, we were at the studio. Then, our other jobs. I would come home around midnight, my dinner a cold shift meal I didn’t have time to eat, and work at my desk, writing for the station and for Lancer.

I had no time to write, and yet it was all I did. For 50 or 60 hours a week I labored to bring a show on air. I traded my craft, my friendships, and my health to make sure the station had its titular show. I didn’t realize the depth of my depression until a year and a half into it. I was at a production meeting, exhausted, having quit my restaurant job in order to free up another twenty hours a week that I could spend coordinating and running the show, and saw on a whiteboard the station’s organization chart. The head of each department had their names written in, their staff below them on the chart, the only persons above them the station’s board and executive director. My name was not on that board. My crew’s names were not written on that board.

It was a small wound, only the thousandth received from that job. The totality of my work didn’t afford me a name. The sum of my producers’ and engineers’ work earned them a single word. I do want to stress this wasn’t vanity; I worked myself to tears for that station, to exhaustion, to the point that time off sent me into paralytic anxiety attacks. My life had become a millstone cycle of bad sleep and stress. For all of that I received this: a budget cut, my staff unnamed, and my name not even written in dry-erase marker.

The holidays followed my resignation from the station, and the real work on Lancer started. Tom had drawn a fair amount of art at this point and driven most of the traffic to the game via his comic — but I had my part: the setting in which the default game would take place. I wanted its world to do two things: cater to a broad range of narratives beyond what canon I’d write, and for the setting to serve as a generative text for players to craft interrogative stories critical of capitalist-realist narratives. To that end, there were a number of considerations I wanted to bake into Lancer.

I wanted to write a utopia not lost, but in the making and under threat. I want Lancer’s players to fight to save a potential golden age of humanity, be it salvation as-is or salvation-through-revolution. As a tactic and gear-heavy mech game, we knew that violence would play a significant role in a given session, but a setting that promoted loot-focused reactionary violence was never the goal. I wanted any fight to be part of a righteous one, and costly, and the prize to be a victory over that which we found odious: fascism, slavery, colonialism, the cruel and petty oppressions and atomizations of human life. At the same time, I wanted players to engage with less overt — but no less terrible — political cruelties: climate change, capitalism, anthropocentric chauvinism, and so on. The enemies you face in Lancer are human, as are your allies; the only devils present in Lancer are ones of our own making.

Player characters in Lancer are the contact point where the setting’s concerns meet mechanics. They are rich narrative territory to examine and interrogate the core setting, dig into the politics of canon entities, and make real material choices about how you build power; NHPs (Non-Human Persons) are, mechanically, a piece of gear in the game, though I don’t think any other aspect of Lancer has generated more thoughtful discussion among players on the morality of use.

At its best, Lancer asks its players: what does your better world look like, and what are you willing to do to achieve it? There are many more specific questions of course: How do I, as an agent of empire who is not loved by their empire, benefit from its existence? How do I perpetuate it? How can I meaningfully resist it? Does humanity need a central organizing body? Can it succeed without one? Or is that premise a false binary? Is anthropocentric progress a reactionary impulse?

Finally, as a speculative work, I wanted Lancer to engage the fantastic. It is here that I felt the most freedom to resist — much to some of our fans’ chagrin I’m sure — some conventions of science fiction. Not everything in Lancer has a logical explanation or a 1:1 objective/correlative relationship. This is intentional: In the context of TTRPG settings, narrative withholding allows room for players to explore their own answers. If I explain in detail the desires of the uncanny entities in Lancer, they become known; there will be things in Lancer whose functions, goals, histories, and desires neither Tom nor I will ever explain.

I should say this: I’ve never shaken that feeling of not belonging as a writer, or the anxiety that comes with having a project you love never feel secure in its foundation. The switch from writing fiction to writing for a game was a difficult adjustment, especially considering its proximity to narrative fiction. Lancer is a novel with half its chapters missing, its main characters unknown to me, and whose ending I’ll never see. I wrote not to craft a tightly-plotted story, but to make a setting that motivates discovery, that urges investigation into the cracks in the setting’s facade; I had to take all my threads and plots and break them into interesting pieces for players to engage with.

It’s an uncomfortable space for me to work in, and yet I have never written anything as easy as Lancer has come to me. I hope to continue writing for Lancer. I hope that this Kickstarter campaign is successful. I hope, through Massif, Tom and I can spread what success we have towards materially amplifying other voices who deserve to be heard alongside and in place of ours.

My advice for other writers — persevere, and finish what you can. If you have friends you can collaborate with, do so. If you don’t, and even if you do, do what work you can when you can. There is no finish line to this work.

Lancer started on a bike ride. On Monday, I think I’ll go for another one, and see where we’re at when I’m done.

Miguel Lopez
Miguel is a writer based out of Portland, OR. His fiction has appeared in NOTHING, his non-fiction and photography in Broken and Coastal. He is the narrative designer of Lancer.